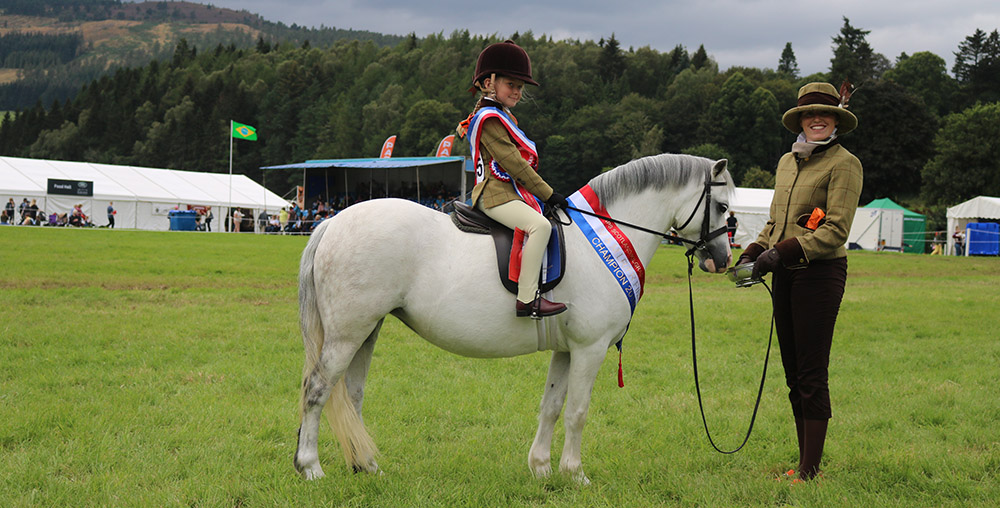 It was another busy day of showing today with the NPS Scotland Finals and Silver Medal Championships taking place across three arenas. Some familiar faces from yesterday’s classes found themselves in the ribbons again, with prize winners, equine and human, ranging from yearlings to octogenarians. We caught up with a handful of the winners.

It was a Dumfries 1-2 in the Mountain and Moorland Senior Championships with Gillian McMurray’s Highland pony Trailtrow Tearlach adding to yesterday’s prize haul when he was crowned Champion. Richard Telford and Castle Neptune were Reserve Champions.

Both Gillian and Richard featured in several other prize givings throughout the day. Gillian and Trailtrow Tearlach were also crowned Senior and Overall NPS Scotland/Townhead Pet n Pony In Hand Mountain and Moorland Champions. Richard produced the six-year-old Connemara Castle Neptune and the six year old has enjoyed success in his five shows to date under the saddle.

Owned by Winsome Aird and bred by Henry O’Toole, Castle Neptune was only gelded in March:

“I’m so pleased with him,” said Richard. “He kept his balance really well but he still needs to strengthen up. He’ll go to HOYS and then have the winter off.”

He had to settle for the bridesmaids position again in the Mountain and Moorland Open Ridden Final, this time riding the eye-catching Highland gelding Jack The Lad Of Ednam House into Reserve Champion status behind winners Joanna Jack and Margaret Of Meggernie, another combination on Championship winning form yesterday:

At the other end of the age spectrum six year old Rosie Findlater and her eight year old grey mare Ffermyllong Spice Girl, aka Molly, won both the Mountain and Moorland lead rein and overall led rein and first ridden championship.

Molly was Rosie’s Christmas present last year and, amazingly, the eight-year-old was only backed in April, having enjoyed a former career as a companion on a showjumping yard.

“I bred Danny out of my Riding Club mare,” explained Juliet. “He was her first foal. He’s had some kind of virus for the last four weeks and hasn’t been ridden so this was his first outing for a while and he was very pleased to be out and about.”