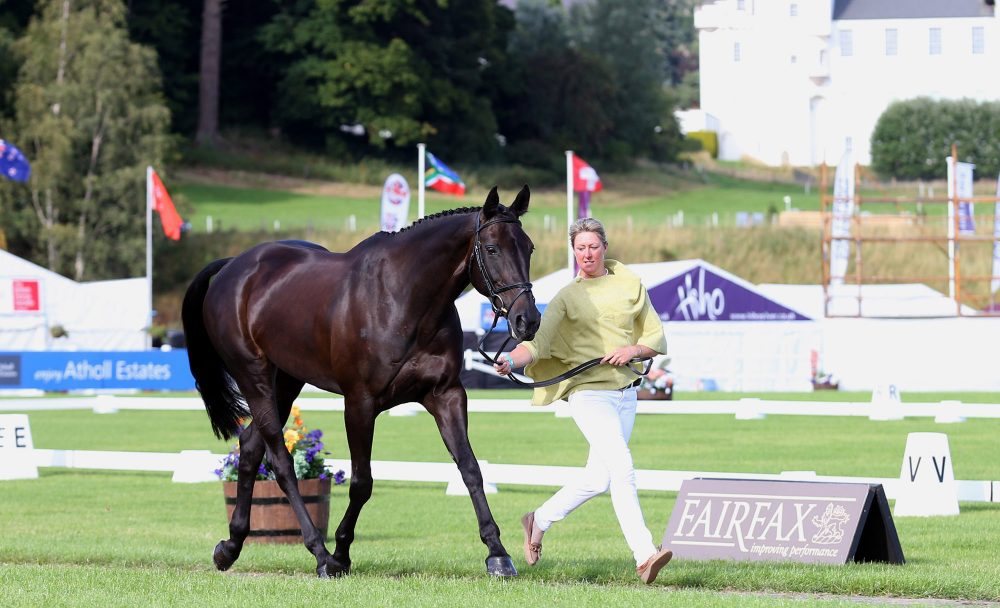 Horses contesting the International Three Day Event classes trotted up in front of their respective Ground Juries this afternoon, to be passed as fit before they start. For the majority of riders their horses sailed through, but there was disappointment for two. Sonya Cunningham withdrew her One Star ride Opposition Eclipse from the hold box, although she does still have Dryfe Royal Cavalier in the Two Star. Amy Furness’s Landmark Abacus is also out.

Tomorrow’s dressage tests start at 10.20am, with the Guinea Pig tests (performed by a horse and rider not taking part in the competition, which serves to give the judges a benchmark test) for the One & Two Star classes at 10am.

The Hunter show will be well underway by then, kicking off at 8.30am, the Highland Pony show starts at 9am and the Arena Eventing at 10.30am. In the meantime the Park remains a hive of activity, with tradestand holders putting the finishing touches to their displays, riders exercising their horses and the stables a hive of activity.

Tickets are available on the Gate, which opens at 8am. Details of what is happening, when are available on the website. And for those who are planning to come to Blair on Sunday, there are still a few places available on the Zip Wire challenge. Organised by Blair’s official charity Barnado’s Scotland, spectators have the opportunity to zip wire off the top of the 90′ castle tower. It’s a perfect, and rare, opportunity to enjoy spectacular views over the estate while descending down the 300m wire – all the while raising money for Blair Castle International’s official charity Barnardo’s Scotland. Pre-registration is required, and the charity asks that participants aim to raise £100 by October with full details available on their website.

“Tens of thousands of spectators are expected for this fantastic weekend of top-class sport which, located in one of Scotland’s most picturesque estates at the heart of stunning Perthshire, proves exactly why Scotland is know the world-over as the perfect stage for events.”