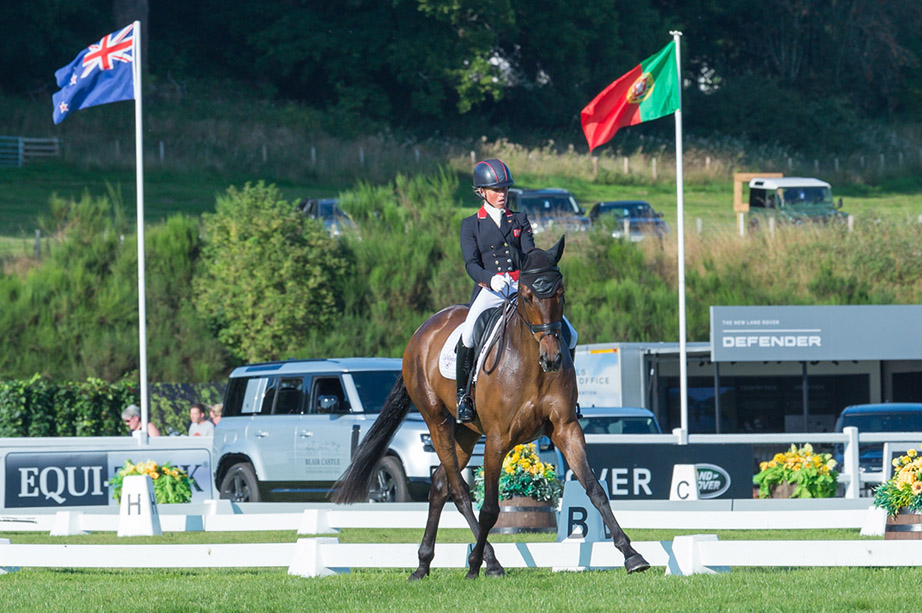 “I want to move to Scotland!” declared the reigning eventing world champion Ros Canter after topping two of the international classes at Land Rover Blair Castle International Horse Trials on day one of dressage. “Every time I look up, it’s just so beautiful, and it is lovely to be here.”

She said: “That was amazing. He’s always been a horse who is marked very well, but in the past few months his strength has really improved and there is still so much more to come. He enjoys his job and has a good temperament for it; he thrives on work.”

Ros, who has recently returned from the Tokyo Olympics, where she was the reserve rider for Britain’s gold medal-winning team, is also in pole position in the CCI3*-L with her own and Alex Moody’s Izilot DHI. The eight-year-old scored 27.1, with Max Warburton and Billy Hennessy close behind on 28.1.

“I’m over the moon with him – that’s probably the best test he’s done, and I couldn’t fault him,” said Ros. “He’s pretty sharp to ride and has been quite a challenge all the way through, but his work is very good.”

She described event director and course-designer Alec Lochore’s cross-country tracks as: “Great – I’m excited about riding round them. They will be educational for my horses, particularly in terms of stamina; the ground is good and there’s plenty to jump.”

The on-form Nicola Wilson is in the lead in the CCI4*-L class with a dressage mark of 29.4 aboard Rosemary Search and Lady Milnes Coates’ Erano M.

“He’s quite light on his feet and he’s quite expressive,” said Nicola. “I was pleased with his test – there were a few little things that can be improved upon, but no major whoopsies. His changes felt lovely – very clean and expressive – and overall, I was very pleased with his attitude. He coped very well and was very rideable.

“We love Blair, and his owners love Blair, so we just like to come and support these three-day events in the north.”

Lauren Innes and Global Fision M are in second place with a score of 30.5.

Another top British rider, Sarah Bullimore, heads the CCI2*-L with seven-year-old Evita AP, owned by her husband Brett and the Seahorse Syndicate. The pair scored 26.5, while Izzy Taylor is runner-up with 28.1 on Hathaway Whole Lotta Love.

Land Rover Blair Castle is hosting the new CCI1* level for the first time, and Sasha Niven and Forrests Foxy Lady lead section E with a mark of 28.9, while Jennifer Morris and JRP Kick On Casanova are in charge in section F on 29.4.