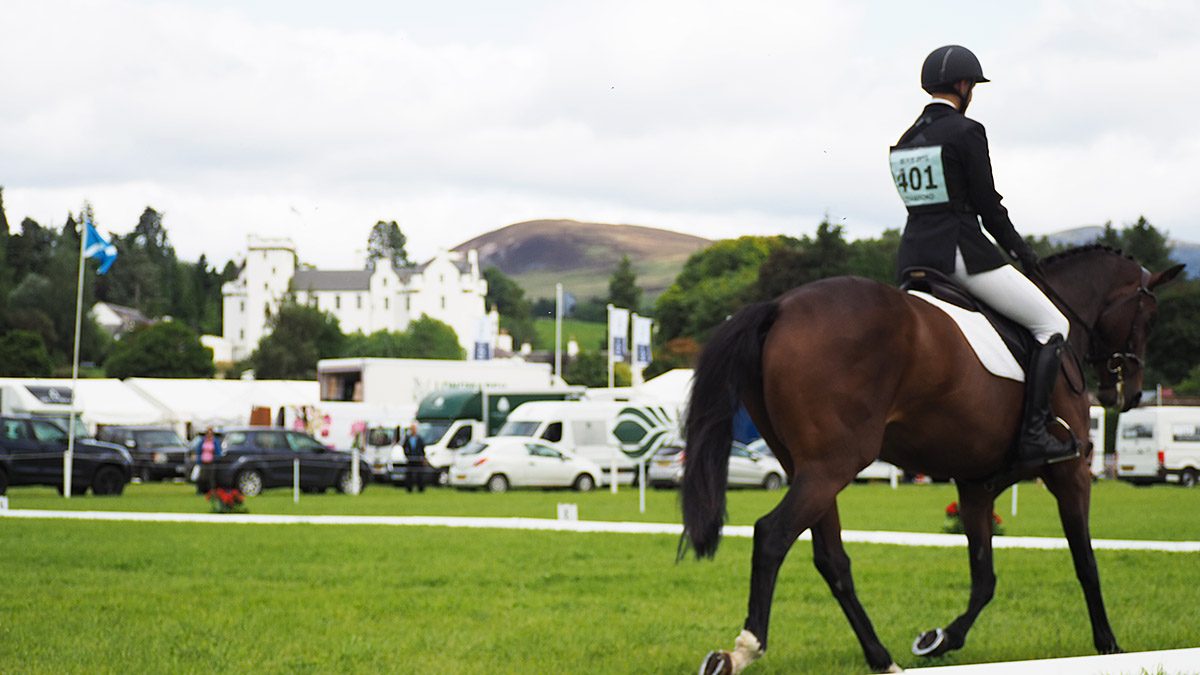 Grassroots riders have the opportunity to compete at Blair for the first time this year, with the bulk of the BE100 and BE90 competitors performing their dressage tests today. Seventy three BE90 combinations and 44 BE100 combinations have come forward after qualifying at one of a range of events across Scotland since 1st July 2017.

They make up a diverse bunch.

Karon Carson from Dunbar, East Lothian has recently been appointed a British Eventing Development Coach. A past winner with her own Finding Nico of both the BE90 and BE100 Championships when they were held at Hendersyde, Karon is riding Dr Jane Valentine’s Hillhouse Master Murphy.

“He can be quite spooky,” Karon admitted after posting a score of 33.8. “I just stuck to my training system to keep his focus. He’s not a horse who will go beyond BE90, so it’s great for his owner that we can compete here at Blair – and of course a great opportunity for grassroot riders to experience riding in an atmosphere like this.”

Also contesting the BE90 Championships is Glasgow based Emily Hedgecoe and her wonderfully named Wickstead Swanky Panky. Emily rode as a child but gave up at 18. She returned to the saddle three years ago and now aged 50 can’t quite believe that she is riding at Blair.

“Tallulah [Wickstead Swanky Panky’s stable name] had done a bit of eventing before I bought her – and she was destined for my son, but he lost interest so I thought I’d have a go,” Emily explained.

“We did two events in 2017 and I kept thinking ‘what are you doing? You are far too old for this’, but adrenalin is good for you, and it is so exciting to be here,” added Emily, who spends her days setting and marking Philosophy A level papers for an English examination board. They go forward to the jumping phases with a dressage score of 36.5.

There are plenty of younger riders taking part, including 16-year-old Aboyne Academy student Roan Grant. Roan partners Caballo Rojo and the pair were winners last time out, claiming the BE100under18 class at Dalkeith.

Roan describes ‘Will’ as a ‘cross-country machine’ and says their showjumping is improving. Roan trains with past Young Rider gold medallist and local rider Wills Oakden, and he has been on a week’s boot camp ahead of this event. “Will knows his job, I just needed to improve how I ride him.”

Usually consistent at dressage, like many of the BE100 horses Will spooked at a circle of gravel in one corner of the arena which will have cost a mark or two – the pair posted a score of 35.3.

Our final featured rider from today is Dawn Morley, who is also contesting the BE100 Championship. The multi-talented Dawn is both a gymnastics teacher and a production chemist in the oil industry. She is, unsurprisingly, based in Aberdeenshire.

Helping a friend at a horse trials a few years back, including at grooming for her at Blair, Dawn decided that she wanted to have a go herself. She had previously been a keen vaulter, “a perfect mix of horses and gymnastics,” she points out. Dawn bought Amier, AKA ‘Ru’ three years ago and since qualifying the pair has already completed two novice level events [where jumps are 10cm bigger], and she has already set her sights on returning next year to contest the CCI1*. They lie on an overnight score of 37.3.

“It’s a dream to be here. My family have strong connections with the area, I volunteer here and it is THE Scottish event”.

Dawn will be found manning the information desk all weekend!

BE100 – with 11 combinations to do dressage tomorrow

BE90 – with 34 combinations to do dressage tomorrow