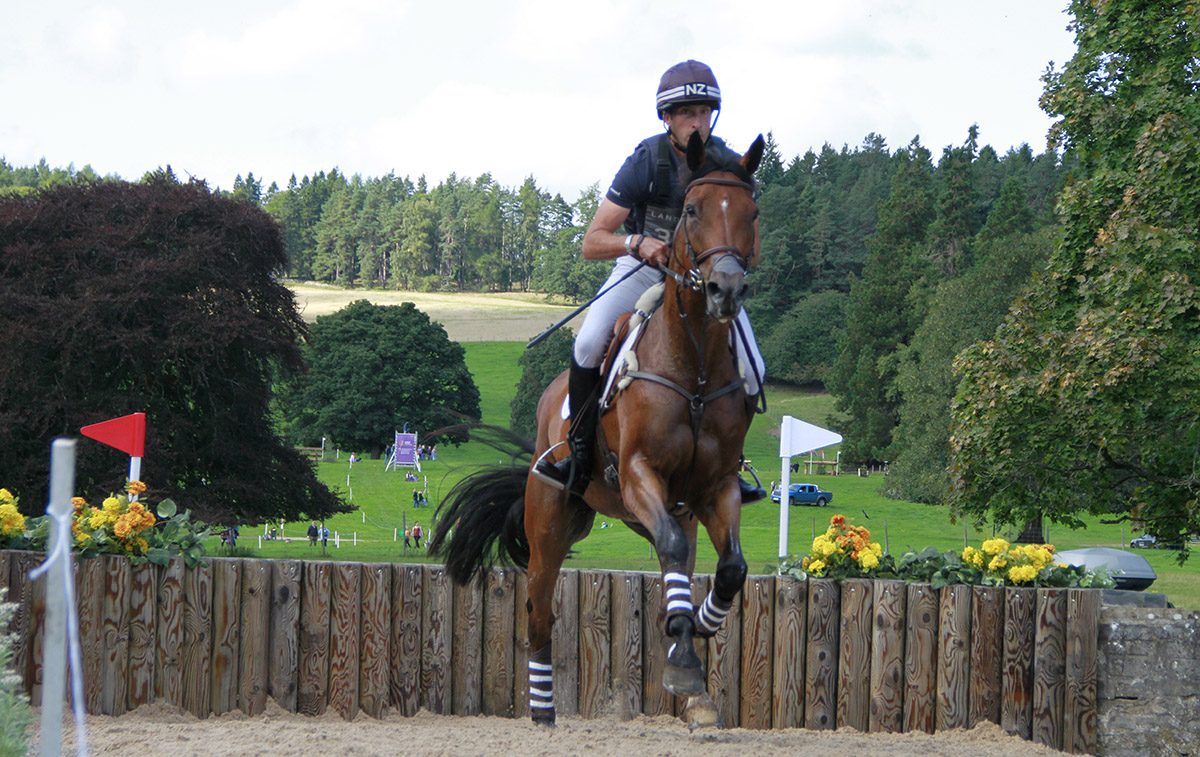 Driving rain was the order of the day on Sunday, resulting in challenging conditions for the final show jumping phase of the three-day eventing classes.

It was all change at the top of the leaderboard in the CCI3*. A fence down apiece for the top two after cross-country, Tom McEwen with Strike Smartly and Izzy Taylor with Director General, opened the door for New Zealand’s Tim Price with Mrs Therese Miller, Jo Preston-Hunt, Philip Hunt and Miss Kate Maitland’s Pats Jester. They show jumped clear to move up from third after dressage and take the win on 28.5.

“He was good, wasn’t he?” asked Tim after his win. “He’s a horse who has always been a bit under the radar but he’s very consistent in his work. He’s a really classic jumper, super fit and he just popped round the cross-country yesterday – I’m very proud of him.”

Tim will probably move the 10-year-old up to 4* level next season if all goes according to plan.

Cross-country leaders Tom McEwen and Strike Smartly dropped to second place after lowering the planks, the same fence he also lowered on his other ride Figaro Van Het Broekxhof. “I just couldn’t jump planks today,” rued Tom. “I can’t fault either horse though.”

Third place went to Izzy Taylor and Director General: “I’m very pleased,” said Izzy. “He had a fence down but that can happen to any good horse. He’s still got a lot to learn but he’s phenomenal across country and a very exciting horse for the future.”

The top three in this section remained unchanged after cross-country. Piggy French was the dominant force, finishing first and third with Cooley Monsoon and Castletown Clover respectively after both horses jumped clear show jumping rounds.

Cooley Monsoon’s owner, comedienne Jennifer Saunders, was understandably over the moon with the result: “It’s just amazing – Piggy is an absolute genius,” she said at the prize giving. “Watching your horse at an event is exhausting though – I’ve barely been able to breath I’ve been so nervous!”

She was equally enthusiastic about Blair Castle: “It’s my first time here and it’s glorious, I think I might be slightly in love with this event. There’s so much to see and do – hopefully we’ll be back again next year as I’d love to bring the family.”

Tom McEwen brought CHF Cooliser home on her dressage score to finish second on 28.7, rounding off a fantastic season for the eight-year-old mare who won her last three one-day competitions before coming to Blair:

“She’s done for the season now,” said Tom. “Blair was our goal and she’s done everything we’ve asked of her. She’ll have a good break now and then we’ll spend the winter working on flying changes so she can step up to 3* level next season.”

A fence down proved expensive for Matthew Heath and Lockroy and they dropped from fourth place after cross-country to eventual 14th. Emilie Chandler and Jemilla then took advantage and moved up from the fifth place they had held after the first two phases after show jumping clear.

Berkshire-based Kiwi James Avery and Lizzie Edwards’ Seaflower also retained the lead they established after dressage and won the CCI* on a combined score of 25.2.

“She tried her heart out all week so we couldn’t be happier,” said James. “She’s good fun to ride as she has a lot of attitude. My job is to contain that.”

Second went to Nicola Wilson with JL Dublin on 28.6: “I’m thrilled with him,” said Nicola. “He’s only seven and he has matured so much this year. We came here to get our qualification for the seven-year-old Championship at Le Lion so it’s just a case of fingers crossed that we get selected now.”

It was also a case of ‘mission accomplished’ for third-placed Paul Sims and another seven-year-old, G Star Van De Klinkenberg, who also secured their Le Lion qualification:

“I’m very chuffed,” said Paul. “He’s never been to an event with this much atmosphere before and he was terrified by all the umbrellas today. It’s nice to know that he can stay focussed and also that he can stay for nine minutes across country, which he did yesterday.”