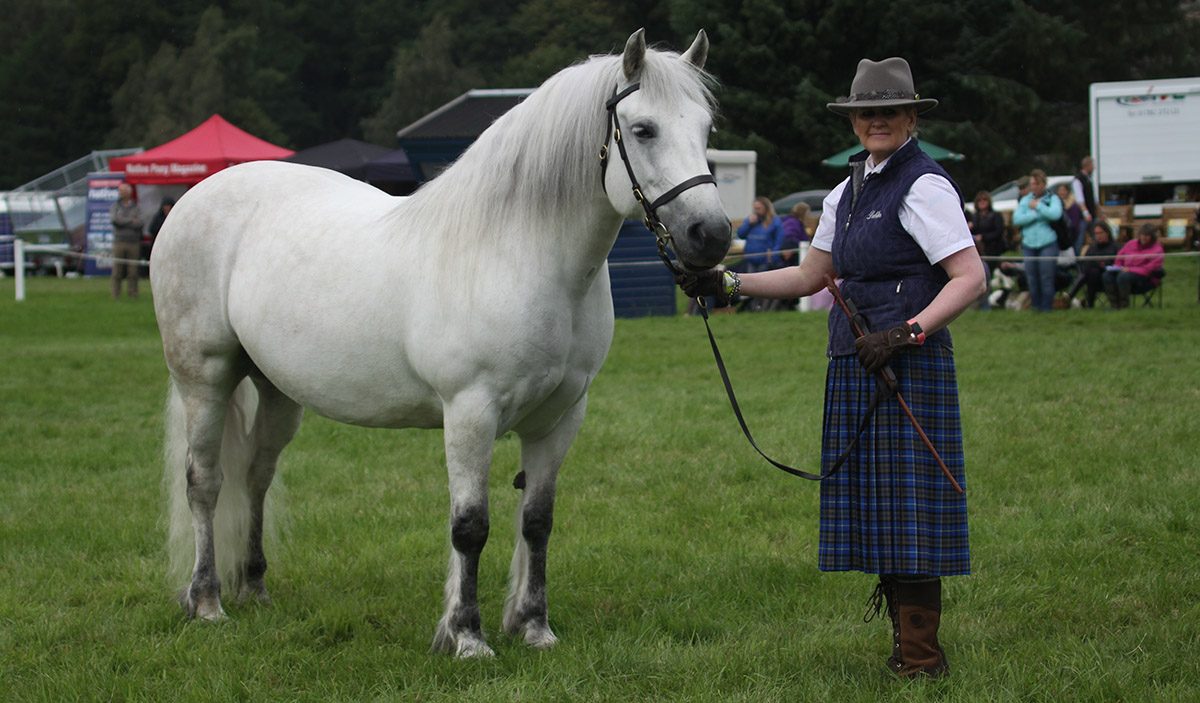 Thursday’s Highland Pony Silver Medal and Hunter shows took place over four arenas and attracted a healthy crowd of spectators. We spoke to a handful of the winners:

Marita Dobson-Barr could not have been more delighted with her 12-year-old mare Oatcake Of Whitefield (pictured) when she was crowned Highland In-Hand Champion.

“This means everything,” she said immediately after their win. “It’s our first time here and our biggest win to date. She’s just a fabulous mare and like a big Labrador – I’m so proud of her and she’s definitely earned herself a couple of jelly babies!”

It’s back to work tomorrow though for the Dumfries flower shop owner, much to the delight of her husband who she’d left in charge of the shop today.

Susan Fairfield’s Motzart of Millfield also secured his biggest career win by taking the NPS/Baileys Horse Feeds Highland Pony Open M&M Qualifier, the final of which will be held at the Horse Of The Year Show, later this year. Bred at Willie Allan’s Millfield Stud, he is half-sister to former in-hand Champion Michaela of Millfield.

Denise Richardson-Rowall swapped her day job as an Educational Farm Manager at Home Farm on the Dumfries House Estate for a winner’s sash when she piloted Heggelane Hillbilly to victory in the lightweight hunter class and then won the overall ridden hunter championship.

The five-year-old was home-bred by Denise by her showjumper Holywood.

“He was third at the Royal Highland and Supreme Champion at the Dumfries show so we’ve had a great season,” said Denise. “All the judges have said how light he is on the forehand and through behind – he’s a hell of a goer too! It’s my first time competing here and what an amazing show it is – it has fantastic shopping too so that’s where I’m going now.”

Caithness-based Nicola Manson, who is currently on maternity leave from her job as a Manager with BT, and her 10-year-old mare Mohill Millie walked away with the Coloured Horse Championship after also winning the CHAPS (UK) non-native open ridden qualifier.

“She does a bit of everything really,” said Nicola, “and we’ve been coming here for years. We’ve been second and third before so it’s great to finally win.”

Another returning champion was former Highland Novice Champion Harries Of Mendick. The 7-year-old working stallion, who was produced and ridden by Cumbrian-based Brian Wilson, this year won the Open Ridden Championship and was also crowned Overall Ridden Champion.

Class 1 Yeld mare, 4 years old and over, competing in other sections