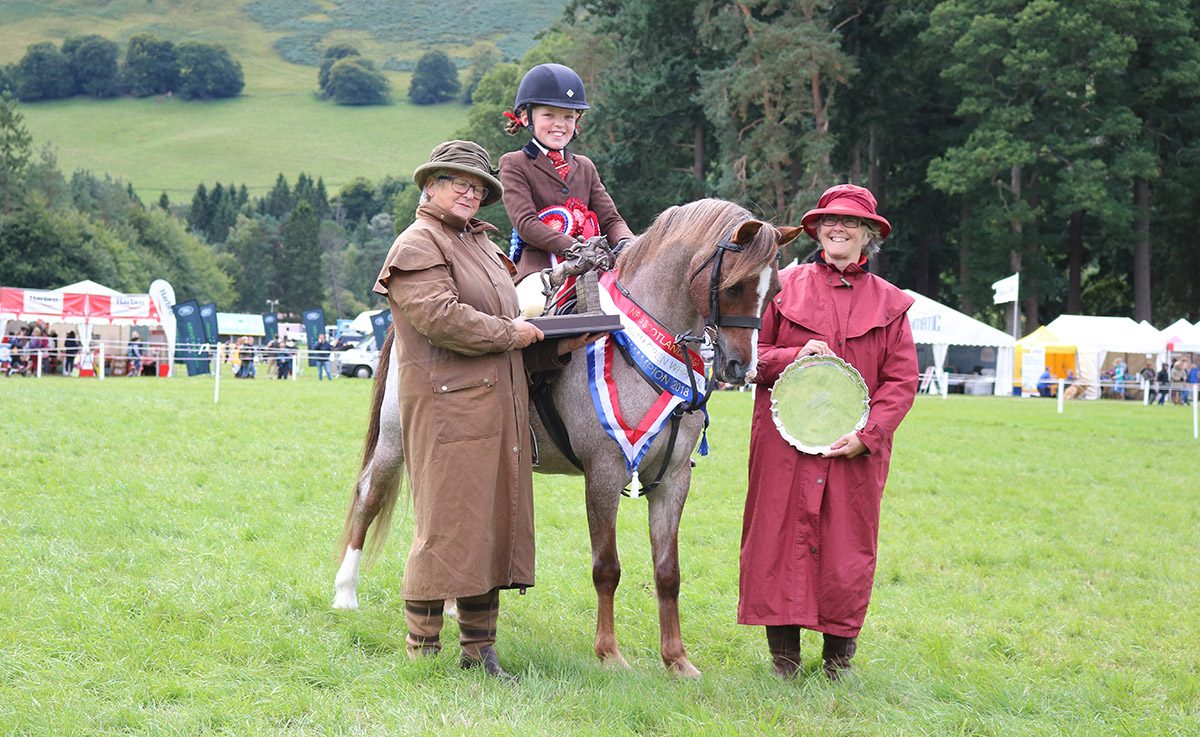 Friday saw the running of the 2018 NPS Scotland Finals and Silver Medal Championships. The climax of the NPS season, the show attracted a record 415 entries.

While Jo was understandably over the moon with the win, Katrina appeared to take it all in her stride, despite only recently having returned to the show ring after enjoying several months away at grass:

“She’s been on Weight Watchers for the best part of a year,” laughed Jo. “She’s lost over 80 kilos but it’s taken a long time. It’s really special to win here – Blair Castle is like an end of term party for me.”

Elsewhere 10-year-old Emily Campbell from Caithness beat off much older and experienced competition to win both the NPS Scotland/Kingfisher Building Products Mountain & Moorland Working Hunter Pony Final for ponies not exceeding 122cms and the overall Mountain & Moorland Working Hunter Pony Championship. Emily was partnered by Isabel More’s Welsh section B gelding Annondale New Approach who she has been riding for the last three years.

“I’m delighted,” said Emily who also finds time for swimming, dancing and playing the clarinet around riding and school. “This is the first time I’ve been a Champion at Blair so it’s exciting.”

Alice Gilliland and her own Welsh section D Derradda Rummy were Reserve Champions.

Airdrie-based Aileen Curl took the Highland In-Hand (4-years-old and over) class with her main ridden pony Rosy Of Strathmore:

“I love this little pony – she’s so easy,” said Aileen. “She’s seven now and was quite difficult when I first got her as a youngster but we’ve come a long way and have a real bond now.”

Later in the day Aileen was a winning owner again when Brian Williams rode her Highland gelding, Harris Of Mendick to victory in the NPS Scotland/Baileys Horse Feeds Mountain and Moorland Highland Open Ridden class. All in all it’s been a successful couple of days of the son of Dougal Of Mendick as he also won the Open Highland Pony class on Thursday.

There was success for breeder William Ireland and jockey Richard Telford with the seven-year-old Dales Kilmannon Jack Sparrow. They won the Baileys Horse Feeds Mountain and Moorland Open Ridden class for Fell and Dales ponies (with stablemates Kilmannan Robert The Bruce placed third) and were later awarded the Open Ridden Championship.

At the other end of the experience scale sisters Isla (6) and Lucy (5) Smith from Dalbeattie were first and third in the Mountain and Moorland Lead Rein Final with Lacy Flight and Calderberry Raider respectively.

Isla was very proud to have won her first Championship at Blair and, more importantly, to have beaten her younger sister in a large class which boasted 34 entries. Her day then got even better when she and Flight were named overall Minor Champions. Meanwhile Lucy, ably led by Mum Laura, was delighted with her third place on Calderberry Raider who she described as: “my best friend in the whole world.”