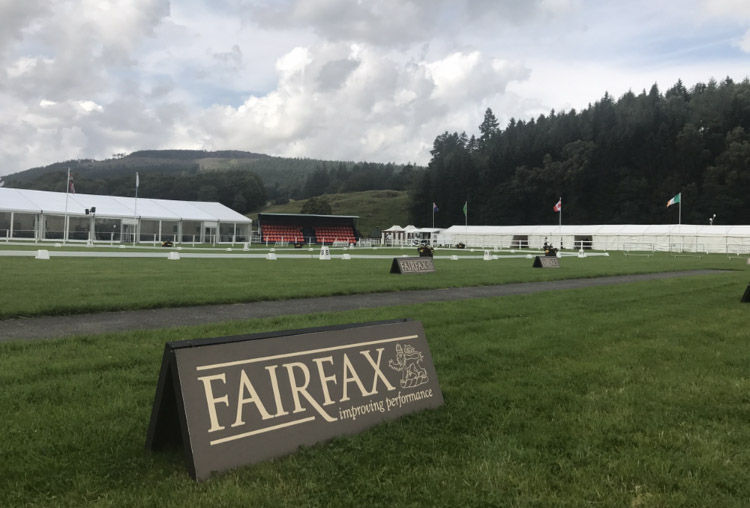 There was plenty of drama prior to a fence being jumped this morning, with horses withdrawn, horses eliminated and one severely lame jockey.

Local rider, Emily Parker once again kicked off proceedings at 7.30am in the main arena. In the CCI1 Star, Opposition Hemera, the second ride of Kirsty Johnston, was the first horse to be held, though they were accepted after a second presentation to the Ground Jury.

Louisa Milne-Home looked lovely, as she presented her horses wearing a green tweed skirt and jacket with navy blue piping and a navy blue hat to match. Her first horse, Grantstown Harry sailed through, but her second mount, Cinque Terre was sent to the holding box. They passed on second inspection and it did mean we got another look at that gorgeous outfit.

Springtime Jazz and Sam Arthur-Magennis were passed at the second presentation while Janet Clarke’s Tch Top Label was eliminated on initial presentation.

Elana Chilton was in celebratory mood, as she presented A Touch Cavalier with a pair of champagne glasses quarter marked onto his hindquarters. It worked, however, as the pair sailed through inspection.

In the CCI2 Star inspection, there was brief confusion over the identity of Oliver Townend, as a wavy-haired, Ludwig Svennerstal appeared to bring his horses forward. After a few mixed glances, it was confirmed that the Swedish rider would be presenting both of Oliver’s rides. Ludwig presented Khoi Traveller and Tregilder, but they were both referred to the holding box. Oliver returned to re-present and they both passed.

Wiedam (Lucy Grindal), Easy Spring (Olivia Bartlett), and Champagne Charlie XI (Morgan Gray) were all sent to the holding box, with only the latter two being accepted when represented.

There was a serious lameness issue when Kirsty Johnston presented Classic IV to the ground Jury. Kirsty looked lovely in her deck shoes, but they didn’t offer much protection, as Classic IV trotted on her toe. After a few moments of hopping, Kirsty continued and the pair passed. Perhaps she may consider steel toe caps next time?

All seven pairs were accepted by the Ground Jury in the CCI3 Star.