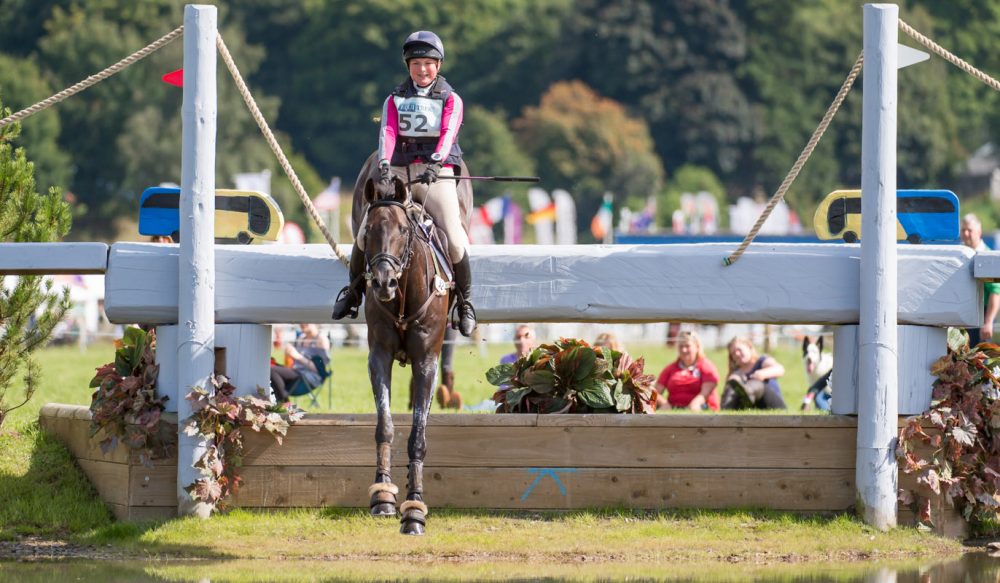 Scottish event riders were out in force at the Blair Castle Equi-Trek International Horse Trials, showing some impressive form.

“He’s quite a quirky horse,” Emily admitted. “He has a huge jump and is very fast but he can get pretty excited in the dressage. He will do a very good test in time, but it is the phase he finds the hardest. I love Blair – living in Scotland my horses are used to hills so I can be confident that they are fit enough to compete here, it definitely works to my advantage.”

Morven Pringle from Moffatt, who had been hard on Emily’s heels, suffered a horse fall with the end of the course almost in sight – Dunbog Gypsy Rose made a mistake at the corners at fence 21, ending Morven’s challenge. Both horse and rider were fine but Morven subsequently withdrew from the One Star class when lying in 19th place.

So Flora Harris from Swindon is this year’s Scottish Open Championship. Sitting in second place after both the dressage and the show jumping, with the withdrawal of the Burghley bound Improvise, ridden by Australia’s Bill Levett, a fast clear from Flora’s Bayano left her well clear of the field.

CCI2*
Eilidh-Jane Middleton, from Banchory, & Westmur Quality posted a ninth place result despite a rail down on the final day, to finish one place ahead of fellow countryman Daniel Scott and Zen Roundthorn who also slid in to the top 10. A quicker cross country round moved Eilidh-Jane ahead, the two riders climbing from 24th and 23rd place after dressage respectively.

Eilidh-Jane also had had a near-perfect event in the CCI1*, this time riding Ballinteskin Hero, completing the competition on their dressage score and climbing up the leaderboard from 37th to eventual 15th, just ahead of Douglas.

CCI1*
In the One Star class 17 Scottish riders came home clear and inside the time across country. Leading those from North of the Border from the dressage was 17-year-old Rosa Onslow from Howick. Sixteenth after dressage on board Lizzie Brown’s experienced Henton Attorney General, Rosa moved up three places with an immaculate performance over the solid fences. She completed her competition with a clear round in the show jumping, to finish on her dressage score, best of the Scots, in 10th place

Rosa’s second ride, Limbo Kaiser, also gave her a fabulous ride across country, clear and inside the time. Two rails down on the final day left her 27th.

This has fulfilled a long-held dream of Rosa’s to ride at Blair. “I’ve always wanted to ride here. It was a great cross country course, you had to ride really forward and both horses gave me great rounds. Henton was awesome in the showjumping, making up for my round with Limbo who lost a shoe over the last warm up fence. I got in a fluster and we had the first two fences down which was really disappointing.”

Longlisted for the British Junior team Rosa has had a successful season, both with Henton Attorney General – who is proving a great ‘schoolmaster’ for her, and with Limbo Kaiser, who was bought from Ireland and has learnt his trade alongside his jockey.

Breathing down Rosa and Henton Attorney General’s neck, just half a penalty off the pace, was Perth’s Douglas Edward with Rehy Volunteer. A single show jump down on the last day proved expensive for Douglas, and he finished 16th.

Eilidh-Jane Middleton from Banchory & Ballinteskin Hero had a near-perfect event, completing the competition on their dressage score and climbing up the leaderboard from 37th to eventual 15th, just ahead of Douglas.

Another big climber was Henny Cooper riding Sportsfield Two Tone. Henny, who is based in Kelso, languished in 47th place after the dressage, but a good cross country round and clear show jumping moved her up 24 places to 23rd.

So Blair Castle International Horse Trials has come to a close for another year. New champions have been crowned, and the whole gamut of emotions have been felt by those contesting this year’s titles. In 12 months time they will do it all again.