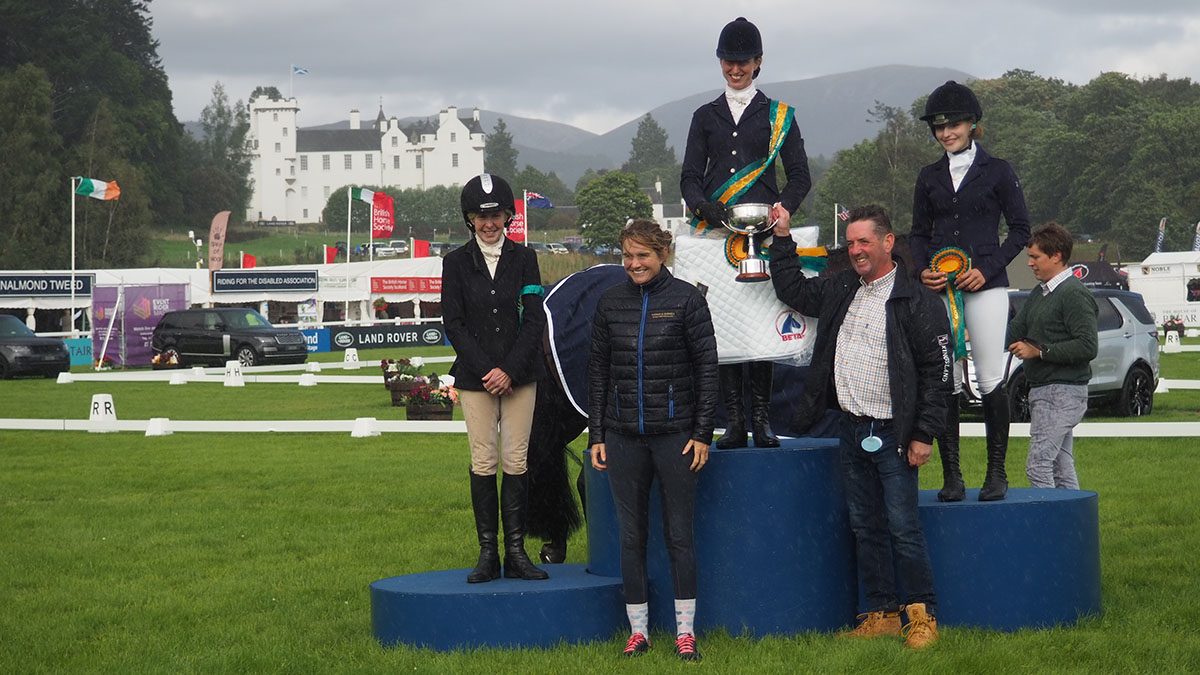 Land Rover Blair Castle International is proud to have hosted the Scottish Grassroots Championships for the first time, for competitors riding at BE90 and BE100 levels [where fences are no bigger than 90cm and 100cm respectively]. The addition of this Festival to the international horse trials means that five Scottish Champions will be crowned by close of play on Sunday, from BE90 to three-star.

Rose Macpherson was the first champion to be named. The Crieff based SCBE100 winner steered Ballingowan Carrie to victory, completing the competition on her dressage score of 29.3. Lying in third place after the first phase she climbed the leaderboard when the two combinations above her picked up jumping penalties.

“I last rode at Blair 11 years ago, in the CCI Three Star – it’s quite emotional to be back,” Rose admitted. “Blair is so special, I ride the cross country courses here in my dreams!”

She describes Ballingowan Carrie as: “quite inexperienced. The cross country was a big ask for her – we trotted in to the ‘Haggis’ fence because I knew she’d find it spooky, and she was very genuine at the double of angled brushes where I got my striding a bit wrong. We haven’t done much this year but I think this is the best she has ever gone in all three phases.”

Stirling based sixteen-year-old Elspeth Bryce and Lacoste enjoyed an even bigger climb, from eighth after dressage to eventual second, courtesy of their clean sheet in the jumping phases.

“Charlie [Lacoste’s stable name] is a real attention seeker and complete escape artist, but he handled the atmosphere really well – it was probably the best dressage test that he has ever produced,” said Elspeth, a student at Dollar Academy. “It’s been a great experience to ride here; I’m hoping to back next year for the CCI One Star.”

Completing the top three was Jane Reid from Dundee riding Jay Silverheels. Jane has evented for over 30 years, and is a past young rider team selector. She is also a grandmother to two small boys, but despite her seniority in the world of eventing admits that, “the affliction has yet to leave me”.

“I did have it in the back of my mind that I could get a good result – and but for coming home one second too fast I could have made it the runner up spot.” Jane also explained her horse’s name: “My husband suggested it. Jay Silverheels is a coloured horse, and that was the name of the actor who played Tonto in the Lone Ranger television series.”

Drumoak’s Sophie Bultitude and Laghey Clover led from pillar to post in the BE90 section. The pair upgraded to BE100 level last month and won at their first attempt, at Forgandenny Horse Trials. Their experience showed: the pair enjoyed a winning margin of eight penalty points.

“My only goal was to finish on my dressage score,” said 22-year-old Sophie. “I’ve never done a championships before but Laghey Clover loves his job. We got a better dressage score than I expected and as an ex-showjumper I was confident about that phase. He was really bold across country.

“It’s a beautiful event, I’ve always wanted to ride here, having been a spectator lots of times.”

Claire Smith regained the runner up spot she held after dressage but lost due to a lowered show jump pole, thanks to clear cross country round inside the optimum time. The Stuartfield rider partnered Equit, a new ride for her this season and one of two horses she competes.

“I knew that Equit was more than capable, and he gave me a fantastic ride across country; it was more a case of making sure we didn’t go too fast. It’s been an amazing experience.”

The final podium place was taken by another past Blair International rider, John Hill; John last contested the CCI One Star back in 2001. A full time riding instructor, he took several years out of competitive eventing to focus on dressage, but was back riding Ailsa Trafford’s Pollys Wish.

“She’s just starting to come together – she skipped round the course today. It’s great to be back at Blair, and for so many grassroots riders to have the opportunity to ride here.”

Full results can be found HERE

Photo of the BE100 winners, with Piggy French and David Wilke © Bogdan Lungu