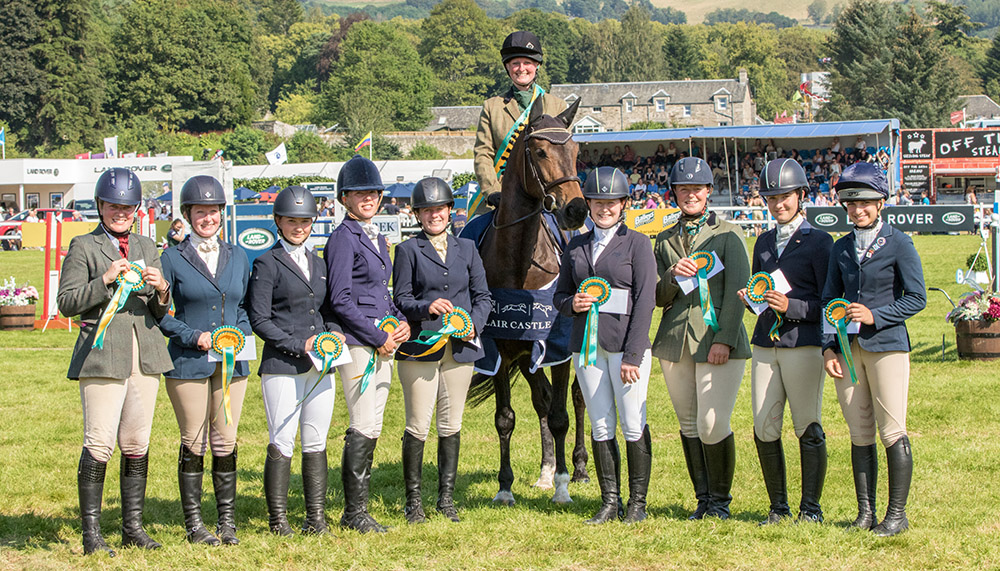 It was a Cumbrian 1-2 in the hotly-contested BE90 Championship. With just under four penalties separating the top 10 combinations, Annie Sandell and her 15.1hh Murrah Hall Midnight Maelstrom emerged the winners, completing on their dressage score of 32.2. Runners-up Emma Little and Alecon added just .4 of a cross-country time penalty to their two-phase score to complete on 33.2.

Murrah Hall Midnight Maelstrom has only contested a couple of competitions this season, primarily due to Annie having to balance riding with the demands of caring for her 10 month old daughter while also expecting again.

“I’ve carried on as normal as I trust him 100%,” said Annie. “I’ve had him since he was a yearling and also backed him so we know each other very well. He is the Bart Simpson of the equine world though – he’s an absolute nightmare at home but calms down at competitions.”

“This is the first time he’s been stabled away from home and it’s certainly the biggest event he’s ever been to but he’s just been amazing and taken it all in his stride. We had an absolute blast across country and just went for it – I had no idea we’d come home inside the time though!”

Runner-up Alecon is a Dutch-bred 14-year-old enjoying his first season eventing after rider Emma Little bought him from a showjumping yard last year.

“It’s my first time riding here,” she said. “It was scary riding in the big arenas, but also an amazing experience. Alecon can have a cross-country time penalty so I kicked on today and we ended up picking up .4 for going too fast – we’ve never competed over three days before so he was full of it.”

Gillian Edward and Benny Station completed on the same score as Emma and Alecon but took third place after the latter finished closer to the optimum time.

The top two after dressage and showjumping remained unchanged after the final cross-country phase in the BE100 Championship. Rose Macpherson retained the title she won last year, winning this year’s Championship with HHS Canya.

Rose had described the track as “strong and technical” but the seven-year-old HHS Canya stormed round inside the time.

“She keeps me on my toes,” admitted Rose. “She likes to look at everything and she’s as sharp as anything – if she sees something that she doesn’t think looks like a jump she’ll turn round and change direction – fast!”

Local combination Eilidh Macaulay and Rockcon added just .4 of a time penalty to their two-phase score to complete on a very respectable 28.7 and finish second, with Keely Gordon and Thunder VII’s fault-free spin across country elevating them to a podium finish in third on 30.5.

The BE90 Championship top 10 © Katie Neat

We use cookies to ensure that we give you the best experience on our website. If you continue to use this site we will assume that you are happy with it.OkRead more