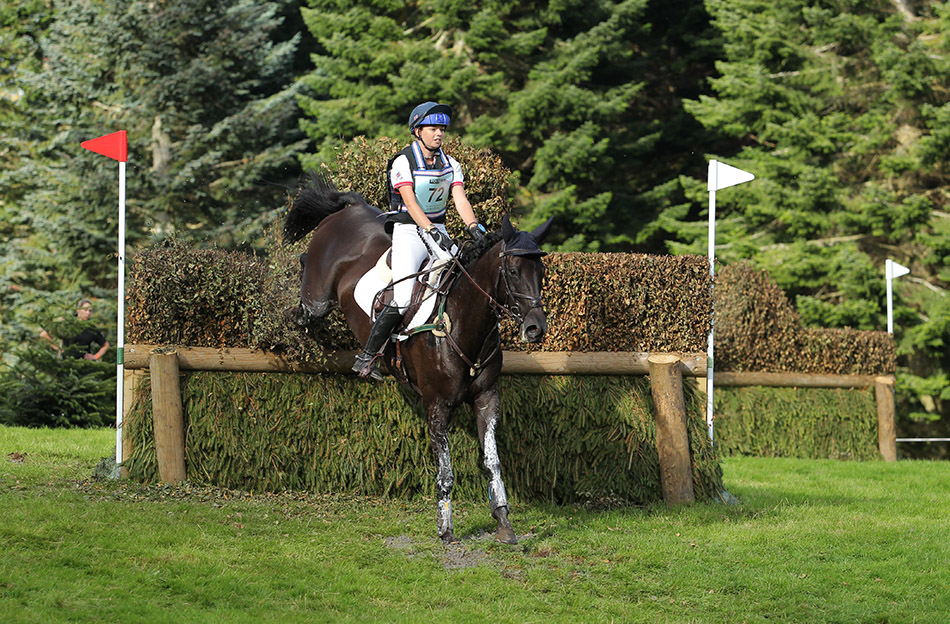 All of the Three Day Event classes had their leaderboards turned inside out during the cross country phases, as did the one class to complete today, the CIC3*.

CIC3*- Young Rider reigns supreme
Harriet Wright and Ngong Hills won the CIC3* on a three phase score of 66.7, ahead of Matthew Heath and Cooley Lord Lux on 70.6 and Olivia Wilmot with Cool Dancer on 71.9.

Today’s two jumping phases proved very influential, both in terms of jumping efforts and time allowed. Matthew and Cooley Lord Lux had led going into the final cross country phase but 27.6 time penalties saw them drop to eventual second. Oliver Townend and Ridire Dorcha had also been in contention after show jumping but incurred 20 penalties at the pair of skinning arrowheads at 16AB, the most influential fence on the course.

Third after dressage on 43.9 but dropping down to fifth after show jumping after picking up six time penalties, 18-year-old Harriet and Ngong Hills (aka Arthur), a former ride of Nicola Wilson, secured their win after jumping clear across country in the fastest time of the day, with 16.8 penalties.

“I’m very surprised, I don’t quite know what to do,” admitted the Derbyshire-based full time rider. “Mum and I had a little cry after we heard I’d won – this is only our second competition at this level. I’d just wanted to get round the course clear to be honest and didn’t realise I’d gone so fast. Arthur was brilliant, I just went with him.”

Despite losing his two-phase lead, Matthew said he could not have been happier with Cooley Lord Lux:

“He only really came here for a canter round as he prefers flat, hard ground, but even when he started to tire he didn’t lose his jump,” he said. Matthew has five rides in total this weekend and confessed to Blair being his favourite event:

“It’s a long drive but it’s always worth it, the surroundings are beautiful and its nice to come to an event where the cross-country is influential.”

Olivia Wilmot and Cool Dancer’s third place was the pair’s highest placing in their six visits to Blair. Now 16 years old, the gelding first contested the CCI1* back in 2008 and was 15th in the CIC3* in his last visit here in 2015.

CCI3*
Harrogate based Hazel Towers was visibly surprised to find herself at the top of the table going in to tomorrow’s final showjumping phase. Lying fourth after dressage, she rode Simply Smart round the mare’s first CCI3* cross country, clear and adding 24.4 time penalties to their score.

“It’s not sunk in yet,” said Hazel, who bought Simply Smart – known at home as ‘The Nightmare’ – as an unbacked four-year-old from Ireland. “The plan was to produce her to novice level to sell, but no one wanted to buy her.

“She’s definitely not for sale now, I love her to bits. She’s not remotely thoroughbred, more of an Irish bog pony, and doesn’t normally like hills; my goal was just to get round and come home safe. She finished full of running, and is normally a good showjumper… but you never know. We’ll see what happens tomorrow.”

Louise Harwood moved up to second place on Balladeer Miller Man, also clear and with 18.8 time penalties, with Alice Dunson dropping down a place to third on Sambo III and Caroline Clarke fourth with Touch Too Much.

Dressage leaders Kirsty Johnston & WTTL Opposition Sky Law were eliminated when the pair parted company almost within sight of the finish, at the Owl Hole (fence 26). Mark Todd also hit the deck when OBOS Colombus faulted at the Forth Bridge (fence19).

CCI2*
Emily King has moved in to the lead in the Two Star class, riding her Barbury CIC2* winner Walitze F Vejgard. The pair made light work of the cross country, coming home clear and inside the time.

Another mare, ‘Zara’ (as she is known at home) didn’t start eventing until she was eight, and Emily describes her as: “rather feisty. She recovered well from the cross country and is fit and strong so I hope she’ll showjump well tomorrow.”

Shane Rose followed Emily around the course matching her fault free round, in Shane’s case riding Gurtera Cher, to lie in second place. Like Happy Times, Gurtera Cher is normally piloted by Shane’s compatriot Sam Griffiths, but Sam has been out of action with a neck injury for much of this season although he hopes to be back in the sadde in the next couple of weeks.

Moving up five places to third is Storm Straker with Well Designed, who also kept a clean sheet as did Oliver Townend and Khoi Traveller who climbed from 16th to fourth.

The top three from the dressage phase all jumped clear, but all picked up significant time penalties to drop out of contention.

CCI1*
It is also all change at the top of the One Star leaderboard after an influential cross country phase. Brasil’s Carlos Parro now has the advantage, moving up from overnight fourth place to first after a fast clear round on Sir Digby.

“I took the ride last season, and the plan is to try to take him to Le Lion for the Seven Year Old World Championships; he needed to complete a One Star to qualify, which is why we are here,” Carlos explained.

“He’s got the experience, and is almost pure thoroughbred so finished full of running. He is normally a careful show jumper but can be a bit spooky – as this is his first Three Day Event I’m hoping he’ll be quite settled tomorrow.”

There is less that one show jump down (four penalties) between the top nine combinations so tomorrow’s final showjumping phase could well see another shake up.