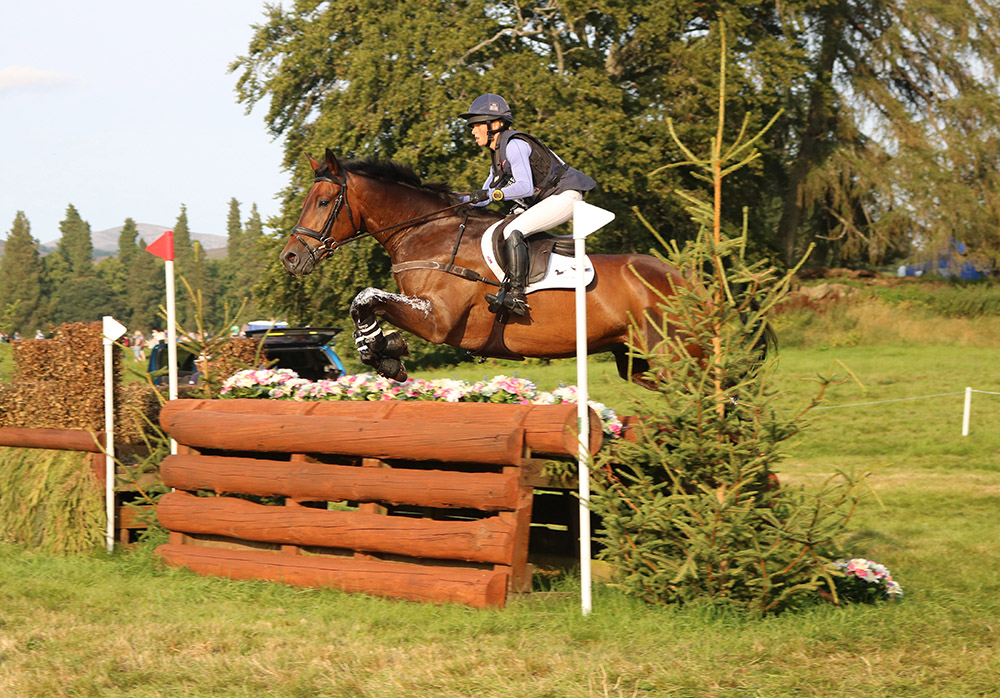 Ros – the reigning world champion – led from pillar to post. She added just three seconds’ worth of time-faults in the jumping phases to her dressage mark of 25.2.

“He’s an amazing horse”, said Ros, who is due to represent Britain at the upcoming European Championships in Switzerland. “He just has an ability to gallop really fast, balance very quickly, gallop down a hill like he’s on the flat ground and be really careful when he gets there. It appears at the moment that he can cope with any kind of track.”

Frenchman Astier Nicolas, who is a regular visitor to Land Rover Blair Castle, achieved the feat of the only cross-country clear inside the time in the CCI4*-S to finish second on Babylon De Gamma, winner of this class in 2019. The pair will aim for a five-star this autumn, either at Maryland in the US or Pau closer to home in France.

“I’m in admiration of him – he’s even better than I thought he was. I always knew he was a good jumper, but dressage wasn’t so easy for him, but he’s improved a lot and now he can do dressage too,” said Astier.

Emily King finished third on Valmy Biats, having risen from sixth after dressage with a showjumping clear and 7.6 cross-country time-faults.

CCI3*-L
Lincolnshire-based Ros Canter is also in first and second positions in the CCI3*-L class after cross-country, having gone clear inside the time aboard both Sharon Bayston’s Shannondale Nadia and her own and Alex Moody’s Izilot DHI. Hayden Hankey is third on Fools In Love.

“I’m delighted with them – I came here really for them, knowing that they needed their stamina testing and their fitness bringing on, and they finished full of running and were both very honest.

“I’ve ridden Nadia since she was a three-year-old; she’s a bit of a dark horse. She’s completely laidback and sleeps all the time, but the further she goes round a track, the faster she goes. She’s one who is a bit easier to overlook, but she gets the job done,” said Ros. “I think Alec Lochore’s cross-country tracks were clever and required a bit of thought around where the fences were placed in terms of terrain, and being ahead of the game as to what your horse might feel like.”

CCI4*-L
A new face tops the feature CCI4*-L class. Rosie Fry was only ninth after the first phase with a score of 33.2 on True Blue Too II, but a speedy cross-country round for just two time-penalties piloted her up to the top of the leaderboard on her aunt Di White-Hamilton’s home-bred 10-year-old.

“I have been in this position before,” said Rosie. “Nine years ago here I had two horses in what was then the three-star; one ended up overnight leader, but things fell apart in the showjumping so I don’t really like to be in this position here!

“I wasn’t expecting to be in the lead. He’s done one CCI4*-L, at Bicton in June, and had a 20 [penalties in the cross-country], that was early on and he got better and better. He’s an amazing cross-country horse, all I have to do is sit and steer.”

Dressage leaders Nicola Wilson and Erano M picked up 14.4 time-penalties across country, and lie in sixth place. Tom McEwen, individual silver and team gold medallist for Britain at the Tokyo Olympics, has risen to second with Dream Big; theirs was the only cross-country round inside the time allowed in this class.

CCI2*-L
Sarah Bullimore retained the lead she had held since Thursday in the CCI2*-L with her husband Brett and the Seahorse Syndicate’s Evita AP after the pair came home one second inside the time in today’s cross-country phase. They now go forward to tomorrow’s final show jumping phase on 26.5, less than a penalty ahead of Lucinda Atkinson and Jane Crossley’s KGB Sandro on 27.1. Lucinda also sits fourth with another of Jane’s horses, Dancing Revolution, while Tom McEwen moved up the leader board to third place with Fred and Penny Barker’s MHS Brown Jack.

“She was quite strong and feisty out there,” admitted Sarah. “She’s a big mare with the best work ethic and I could almost hear her saying ‘whoopie’ as we set off.”

Lucinda Atkinson was understandably delighted with KGB Sandro’s round, particularly as this was the seven-year-old’s first three-day event. “He was just brilliant,” she enthused. “He really is a super galloper and it’s hard to believe that he was doing BE100s at the start of this season.”

Elsewhere, former Badminton winner and past Blair Castle cross-country course designer Ian Stark finished the day in 20th place after posting a clear round inside the time aboard the Duchess Of Devonshire’s Chatsworth Diamond: “I felt sick with nerves in the start box,” he admitted, “but boy did I love that once we got going!”

With less than four faults, or one show jump down, separating the top eight combinations after today’s cross-country, the scene is set for a thrilling finale tomorrow.

CCI1*
There was a change at the top in section E of the CCI1* – a new class to Land Rover Blair Castle, and one that has proved very popular. A showjump down for dressage leaders Grace Botterell and Diamond Pippin dropped them to seventh, while Sarah Clark’s clear round on Secret Affaer VII gave her first place at this stage. However, in section F, Charlotte Cooke and Midnight Dancer showjumped clear and go into tomorrow’s cross-country phase in the first place they have held since dressage.