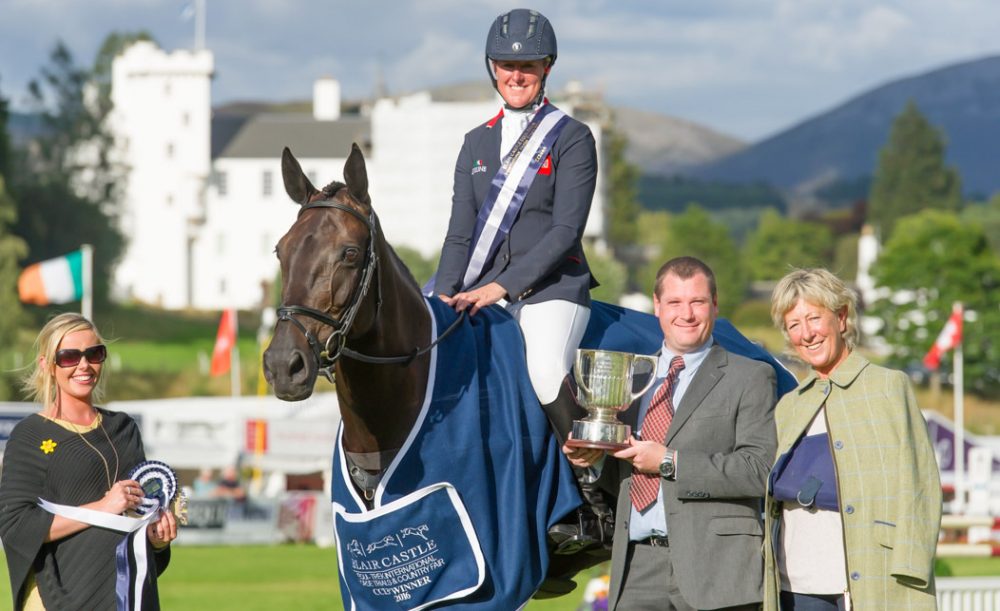 Nicola Wilson added the CCI3* title to her impressive roll of honour at the Blair Castle Equi-Trek International Horse Trials when she and Annie Clover retained the lead they had held from day one.

It wasn’t all plain-sailing for the London 2012 team silver medallist, though, as despite heading into the final showjumping phase with a three-fence cushion, the pair dislodged one pole and racked up seven time penalties to reduce their winning margin to just 1.3 penalties.

“Clever Annie,” Nicola enthused. “I’m thrilled to bits. She’s been so consistent at Three Day Events and she’s finally got the win she deserves.”

Oliver Townend became the first rider to win back-to-back Event Rider Master (ERM) legs when he and Cilnabradden Evo triumphed in the most thrilling of contests.

The podium positions changed as frequently as the weather in the final throes of the competition, but in the end Oliver was in a class of his own, giving the talented but sometimes unpredictable 10-year-old a masterful ride to finish on a score of 45.2 – nearly 10 penalties ahead of his nearest rival.

Germany’s Bettina Hoy, the penultimate rider on the course and lying second after the showjumping, looked like she would pile on the pressure on Britain’s number one, but Seigneur Medicott faulted at the second of two angled brushes at the second-last fence when seemingly travelling very comfortably.

“Luckily I was galloping right past a tannoy and heard about Bettina’s mistake,” said Oliver. “I immediately went down two gears [as he knew he could afford a few time penalties]. I think Cilnabradden Evo thought I was pulling up!

“Everyone knows we’ve had a lot of ups and downs with this horse, but hopefully now we’ve turned a corner,” he added.

There was controversy in the final stages as Jock Paget and Angus Blue, who took an early lead with a clear inside the time, were subsequently eliminated when the ground jury judged that he had passed the wrong side of a flag at the influential double of triple brushes at fence 14a. He was temporarily reinstated but then eliminated again following some extensive video reviewing.

This left ERM first-timer Tom McEwen in second place with Diesel, a horse who has been off games for the best part of two years.

“It’s brilliant to have him back; I’ve really missed riding him,” said Tom.

Gemma Tattersall and Santiago Bay finished third; a result that puts them in a very strong position going into the final leg of the ERM series at Blenheim.

Flora Harris and Bayano were crowned Scottish Open Champions when they took top honours in the CIC3*.

The pair were in second place after the showjumping, but left the start box as leaders following Bill Levett and Improvise’s withdrawal.

They stopped the clock two seconds over the optimum time to finish on a score of 42.8 – some 7.4 penalties ahead of runners-up Oliver Townend and Dunbeau. Paul Tapner and Bonza King Of Rouges finished third.

“That was one of the best rides I’ve ever had on him,” said Flora, who had pulled up the gelding last time out at Hartpury after running into problems at a tricky combination. “It wasn’t his fault at all, but it was great to come here and have such a positive run.”

CCI2* winner Caroline Clarke, who went into the final showjumping phase at the top of the leaderboard with a pole in hand, conjured a foot-perfect clear from her ride, Touch Too Much, to land her first international victory.

“I was shaking when I went into the arena,” admitted the dental student from Bristol, who only gets to ride during university holidays and the odd afternoon in summer time. “I knew he could jump clear, though, so long as I didn’t mess it up.”

New Zealand’s first lady went one better in the CCI1*, leading from start to finish aboard the well-named nine-year-old OBOS Impressive.