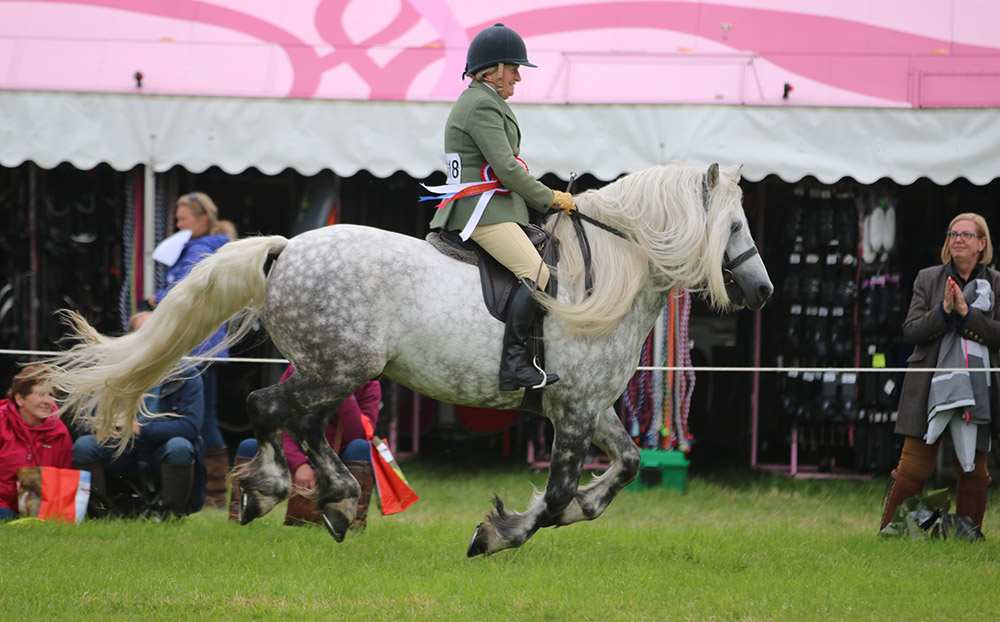 Thursday’s Highland Pony Silver Medal and Hunter shows took place over four arenas and attracted a healthy crowd of spectators. We spoke to a handful of the winners:

“I used to work at Blair with the ponies in my summer holidays in the 1970s, so winning here is very special,” she said.

Trailtrow Tearlach, who also won the Novice class, is a 10-year-old stallion and is the grandson of Rummlegairie Of Trailtrow, another former winner here for Gillian.

“He’s very similar to his grandad,” she commented. “I’ve taken my time with him but I got a really good trot out of him today which I was particularly pleased with.”

11-year-old Margaret Of Meggernie had a winning return from ‘maternity leave’, taking the under 143cms Open Highland Pony class with Jo Jack:

“This is her first win here,” said Jo, “so I’m really pleased. She’s a real Princess, screams for attention and is always bright eyed and bushy tailed. She gets very excited at Blair but I feel totally safe on her.”

“I bought him after he won the Small Hunter Championship at Dublin as a four-year-old” said Freda, “and he’s been really easy to produce since. He really wants to be a show horse and always pricks his ears and ‘smiles’ when he’s in the ring. However, he’s not like that at home – most of the time he just wants to be left alone.”

Horses qualified through one of 29 qualifiers held throughout Scotland and Clare put the 11-year-old  son of Converter’s win primarily down to his temperament:

“He’s so chilled and dead easy to do,” she admitted. “I could leave him now, come back in five minutes and he’d still be here waiting!”

The combination which pipped Clare and Incontention to the overall Championship were the winners of the Open Working Hunter class, Amy Ogilvie and LA Diamond. The pair also won the same class last year and have a busy weekend ahead as they have also qualified for the British Eventing Scottish Grassroots Championships which starts tomorrow.

“I’ve gone over to the dark side,” laughed Amy. “We only started BE eventing this year and I’m loving it.”