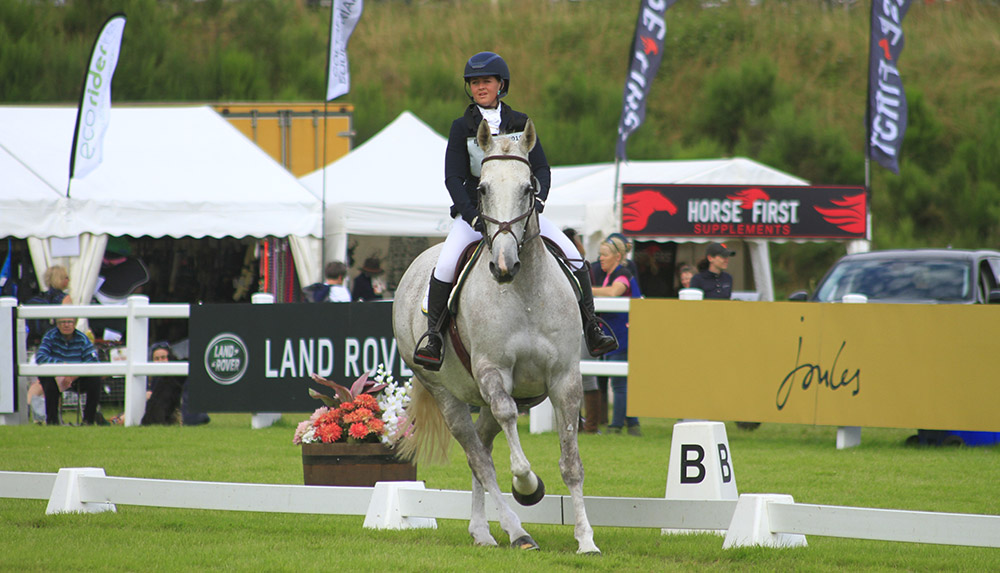 Competitors in the Scottish Grassroots Eventing Festival at Land Rover Blair Castle International performed their dressage tests in the main arena today, either side of the CCI4* short format riders. Hunter class winner from yesterday, Amy Ogilvie riding L.A Diamond, admitted: “It was pretty scary to be riding alongside William Fox-Pitt – fortunately ‘Erin’ behaved herself.”

West Lothian based Amy only started eventing in May, and this is L.A Diamond’s third ever event, having qualified for the Championships first time out, at Hopetoun.

Leading the BE90 class is 21-year-old Leona Blacklaws from Kincardineshire. Leona recently graduated from Glasgow University and is taking a year out to ride. Her partner is the seven-year-old mare Shannondale Enya.

“I’ve had her for two years, but it took a year to really get up and running and build her confidence,” Leona explained. “She can be spooky but was settled today so I was pleased with her test.

“I’ve done showjumping classes at Blair before but it’s been on my ‘bucket list’ to event here. I loved riding in the main arena!”

Sitting on a dressage score of 26.5, Leona has a narrow lead over second placed Rhyian Skinner who rode Watt The Fox to a mark of 28.0, while Amanda Waugh on Fan Daby Angus is still very much in the mix on 28.5.

Meanwhile the BE100 Championship is headed by last year’s BE100 Champion Rose Macpherson, this year riding HHS Canya. This combination has not been out of the top eight this season, and today posted a score of 25.3. Rose’s nearest rival is Lara Bayley Kerr riding Far N Away on 26.0, with Keeley Gordon (Thunder VII) and Emma Buchanan (Blaze) tied for third place on 26.5.

The Scottish Grassroots Championships showjumping starts tomorrow at 8.30am. They run across country on Sunday.