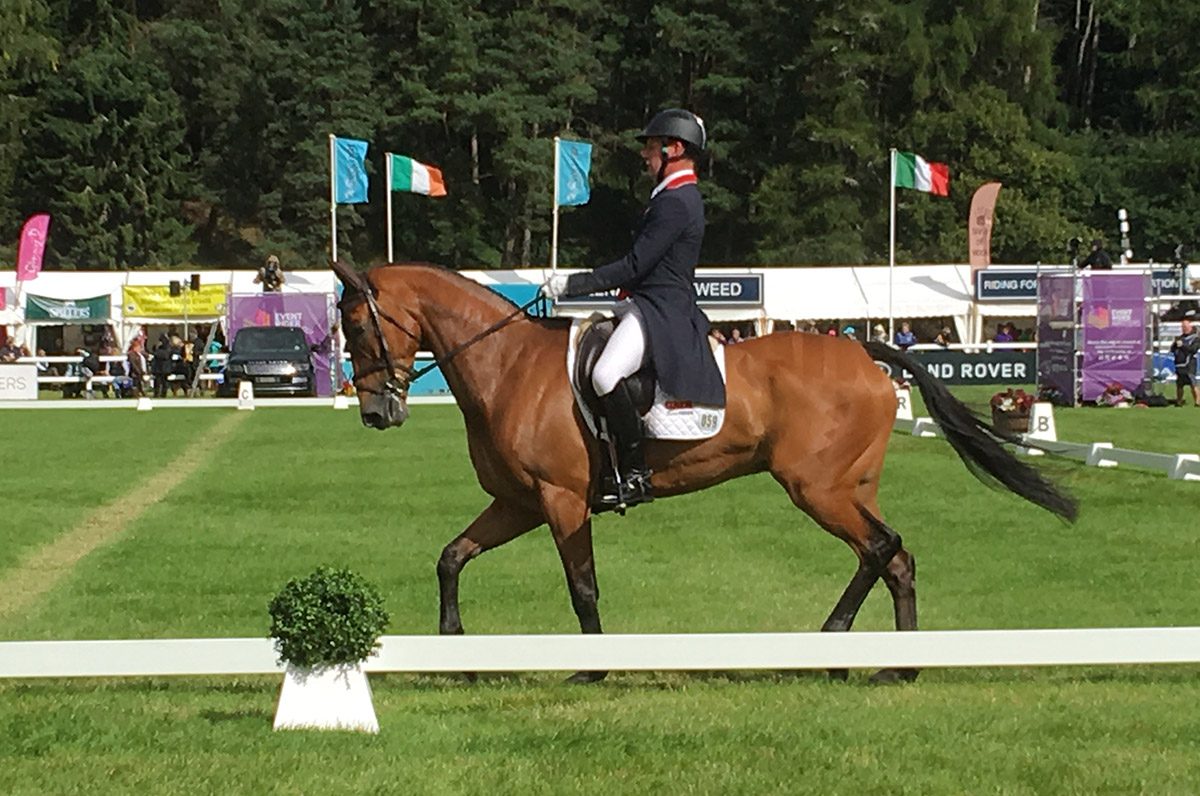 The dressage phase for all but the Event Rider Master (ERM) competitors has now been completed – ERM combinations are inside the white dressage boards from 9am tomorrow morning.

CCI3*
Tom McEwen’s leading ride is Mrs Penny and Mr Fred Barker’s Strike Smartly. Last in to the arena yesterday, Tom went straight to the top of the table, pushing his first ride Figaro Van Het Broekxhof out of the top three.

“Strike Smartly tried his heart out at Badminton this year and he’s still developing so I thought I’d come here for what is a proper tough course but not a four-star, rather than take him to Burghley. His walk and canter work were really good here, but there are more marks to come; he has the nicest character you could hope for in a horse.

“There are plenty of big questions on the cross country course, and you head up the hill early so finding the right rhythm for the horses will be important.”

Izzy Taylor and Director General are less than a penalty behind Strike Smartly on a score of 27.7, with Tim Price and Pats Jester on 28.5 and Figaro Van Het Broekxhof on 29.8.

CIC3* (non ERM)
Oliver Townend’s name dominates the CIC3* leaderboard. He lies in first, second, third, sixth and 12th places, on Cooley Master Class, Cooley SRS, Ballaghmor Class, MHS King Joules and Tregilder respectively. He has, however, told us that the highest placed four will showjump tomorrow but not run across country – they are all entered for Land Rover Burghley next week, where he can run three horses in total.

That will leave him single handed with Tregilder, a horse making his three star debut. “He’s only eight-years-old and has got to this level quite quickly – albeit without any pressure. I’ve had him since he was four and he has a lot of ability,” said Oliver. “Blair is about getting him out in an atmosphere, allowing room for errors and letting him develop. He’s huge [18 hands], but a good galloper and quick with his feet and his mind so he should cope here. I was very happy with him today.

“The more experienced horses will either do Burghley or other goals later in the season – I’m very lucky to have five top level horses sound and well as of today, and Burghley is very accommodating letting me ride three there.”

Taking the top three out of the mix that, theoretically, leaves Piggy French best placed at this stage to take the class, riding Brookfield Inocent.

CCI2*
Thursday night leaders Piggy French and Jennifer Saunders’ Cooley Monsoon remain at the top of the leaderboard in the two-star, with Tom McEwen now leading the chasing pack on board CHF Cooliser.

“Cooley Monsoon is a lovely moving horse and has done a few two stars well so I was hoping for a good mark. We made a couple of little mistakes but on the whole I’m really pleased,” Piggy said. “I’m thrilled with Castletown Clover too [currently lying in fourth place]. He’s not got the movement of Cooley Monsoon but he went in there and really tried.”

CFH Cooliser is a horse very much on form, having won his last three outings – most recently the British Eventing Intermediate Championship at Gatcombe. Just 0.6 of a penalty behind Tom lies Polly Stockton riding Drummer, a ride Polly took over from Ruth Edge when Ruth switched her focus to pure dressage.

Relatively late in the day today, Cheshire based Aimee Penny slipped in to second place riding Lesley Bradshaw’s Serenade III. Twenty-one-year-old Aimee took over the ride at the start of this season and the pair has posted consistent results in all their outings to date.

“She was bought as a dressage horse for me to ride,” said Lesley, “but she has a great jump and it’s exciting to support Aimee.” “The mare has rather a split personality,” added Aimee, “very grouchy on the ground but totally chilled under a saddle. She’s a proper workhorse and is way capable to do well here – I came looking for a good result.”