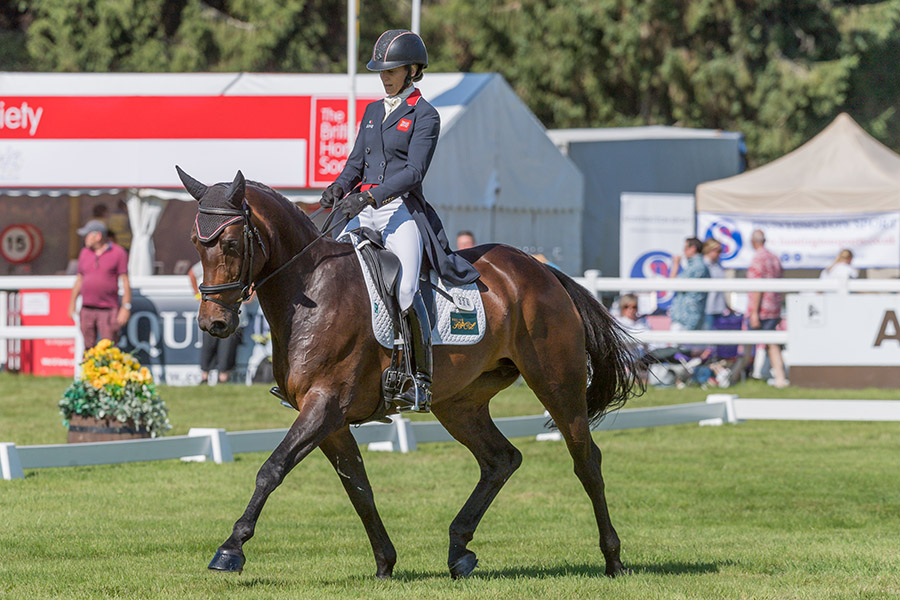 As if further proof were needed that Land Rover Blair Castle 2021 has attracted the stars of the sport of eventing, four out of five of the leaders of the international classes after dressage were today announced as members of the British team for the forthcoming European Championships.

Reigning world champion Ros Canter has held on to her lead in the competitive CCI4*-S class with a mark of 25.2 aboard Lordships Graffalo – one of two horses with which she was named for Team GBR at the Europeans – but she is also in first and second places in the CCI3*-L.

“She’s a lovely horse – a sweetheart,” said Ros. “She had a win in the CCI3*-L at Houghton Hall in the spring; I really nailed her dressage test there and I felt quite a bit of pressure today because I wanted to do it again. But she’s kind of got a 10-minute window of opportunity – sometimes that’s after 20 minutes or sometimes it’s after 30 minutes, so it was trying to gauge which one she was going to give me today.”

Sarah Bullimore, who last rode on a British championship team at the Europeans at Blair Castle in 2015, was delighted both to gain selection once again and to hold pole position in the CCI2*-L at Land Rover Blair Castle 2021. Her mark of 26.5 on her husband Brett and the Seahorse Syndicate’s Evita AP set the standard here on Thursday and no one overtook her on day two.

“I’m chuffed to bits with Evita AP – she’s such a trier and has the best work ethic. She’s a big girl and I think everyone looks at her and thinks she looks really sweet and a real dope on a rope, but actually she’s quite sharp when you ride her. I was just about to trot round the arena before my test when five jets came straight over the top of us, and I wondered whether that was going to send her over the edge. But she was like, ‘Silly boys and their toys, we’ll ignore that!’

“It’s very exciting to be selected for the Europeans [with Corouet, who is the son of Lilly Corinne, whom Sarah rode in 2015 at Blair Castle]; we’re honoured and it’s all the more special because he’s my homebred.”

Nicola Wilson, another to receive the call-up today for the European Championships in Switzerland in September, tops the CCI4*-L with Rosemary Search and Lady Milnes Coates’ Erano M on a score of 29.4.

There are two sections of the new CCI* class at Land Rover Blair Castle. Grace Botterill and Diamond Pippin are at the head of section E with a dressage score of 27.5, while Charlotte Cooke and Midnight Dancer II lead section F on a mark of 27.

The cross-country for the CCI4*-L, CCI3*-L and CCI2*-L takes place tomorrow (Saturday, 28 August) round course-designer and event director Alec Lochore’s challenging track, starting at 8am. The CCI4*-S and CCI1* classes showjump tomorrow, and go across country on Sunday. And the Scottish Grassroots Eventing Festival championship classes at BE100 and BE90 take place on Saturday and Sunday as well, alongside British Showjumping, Pony Club Mounted Games and showing classes.