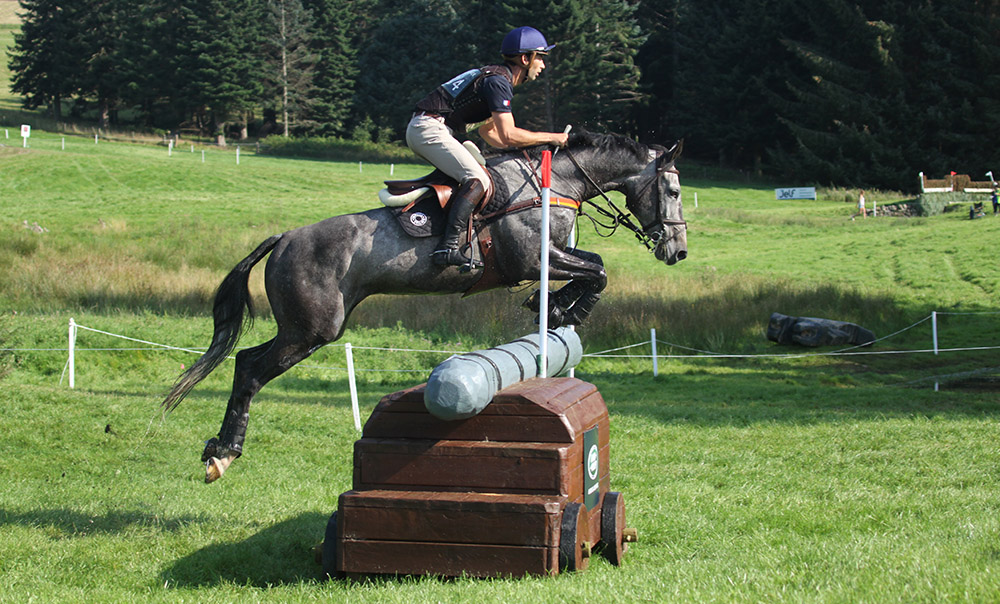 Astier and the exciting grey eight-year-old Babylon De Gamma had dropped from second after dressage to fourth with a pole down in Saturday’s showjumping phase. But they were the fastest of the class round Land Rover Blair Castle’s director and cross-country course-designer Alec Lochore’s track, picking up just 5.6 time-faults, and when leader Daisy Berkeley was not quite so fast aboard Ballinteskin Cooper S, the 30-year-old Frenchman climbed to the top of the podium.

It was Astier’s second Land Rover Blair Castle victory in as many visits; he took the CCI4*-L here on Quickly Du Buguet in 2014.

“It feels very exotic to be Scottish Champion!” he said. “Babylon is a top horse – I’ve always said so, and he showed it again today. I didn’t rush him cross-country, but he was always going smoothly; he did it easily and recovered really well afterwards. He showed pure class.”

Sam Ecroyd finished second, 0.4 penalties behind Astier, on Vicki Irlam’s Davinci III, a new ride for him this season.

Equal second after dressage with the eventual winners, Sam and the 13-year-old gelding showjumped clear but were a little steadier across country for 10 time-faults.

“I don’t know him hugely well yet, but he improves every single time I ride him,”said Sam.

Daisy Berkeley was initially awarded 15 penalties for missing a flag at a skinny brush corner coming out of the Malcolm Lochan water complex, but those were taken away on appeal to the ground jury and she finished third on 10-year-old Ballinteskin Cooper S, who is owned by Daisy, her mother Caroline Dick, Roxana White and Mary Scott-Gall.

Local rider Wills Oakden, who is based in Perthshire, took fourth on Debbie Whalley and Liz Magennis’s nine-year-old Oughterard Cooley. A clear showjumping round and eight cross-country time-faults moved him up from ninth after dressage.

Wills, the highest-placed Scottish rider, said: “I’m delighted with him; he’s a cross-country machine, which is what Blair is all about.”

And Northumberland’s Jessica McKie achieved her best result to date with fifth place on her mother Tockie’s Ask The Boss.

Land Rover Blair Castle’s cross-country tracks, which utilise the varied and demanding terrain surrounding the castle, are never to be underestimated, and the CCI4*-S course caused a few problems. William Fox-Pitt, three times a winner here, was unseated in the later stages of the course from Yes I Can, seventh after dressage.