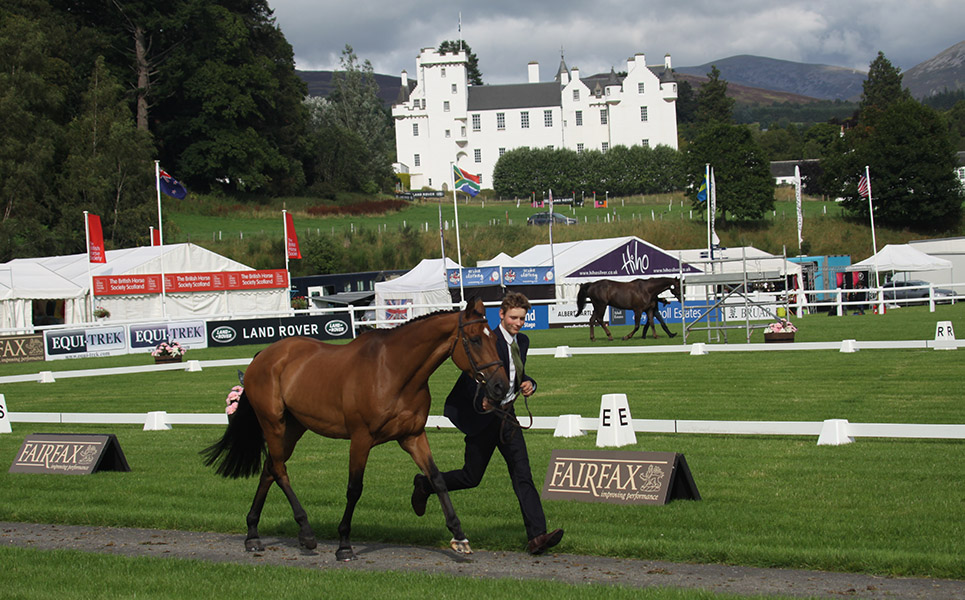 The first horse inspection at the Blair Castle Equi-Trek Horse Trials provided plenty of drama, with horses held, prizes won, innovative quarter marks, and a few riders involuntarily trotted up by their horses.

Local rider Emily Parker kicked off proceedings in the CCI One Star with both her rides accepted by the Grand Jury (the Judges). The first horse to be sent to the holding box was number 113, The Full Monty VIII, ride of Lucy Soeder. Following this, a flurry of horses were held, as number 132, Omard Ala (Isabella Mackenzie), number 133, Ballinteskin Hero (Joanne Kearns) and number 134, Diesel Green (Maximilian Bidinger) were all sent for re-inspection in quick succession.

Shortly after this, number 166, PLS Beroko, the first of two rides of Lydia Hannon in the CCI* was also held. Gods Ground, the ride of Georgina Nicholls and Laura Varty-Lindsay’s Quick Je Jaime were the latest pairs to be sent for reinspection.

Of the above horses, The Full Monty VIII and Diesel Green re-presented and were accepted while Isabella Mackenzie and Joanne Kearns chose to withdraw their respective mounts. Diesel Green, Gods Ground and Quick Je Jaime were all accepted. Lydia Hannon chose not to re-present PLS Beroko.

In the CCI two star, only two horses were sent to the holding box. Jack Dale’s Silver Monty was eliminated while Emily Philp’s Cupido III was accepted after a second inspection.

All twelve horses in the CCI three-star class sailed through the first horse inspection.

Several horses took the opportunity to demonstrate just how fit they are, throwing in the odd canter stride, buck and rear. Katie Barber had her hands full with the first of two rides, Daytona Dreamer, showing just how good he was on two legs.

Early Spring was a handful for Olivia Bartlett in his Two Star inspection, while the Three Star horse inspection saw a very excitable Balladeer Miller Man, who looked to grow a fair few hands with the tiny Louise Harwood, and a giddy MHS Nebraska, who decided trotting sideways would be fun – rider Rosie Thomas seemingly seeing the funny side.

Some riders demonstrated their patriotic side through quarter marks and attire. Both of Padraig McCarthy’s horses branded the Irish clover, while Caroline Clark showed her county pride with the Yorkshire rose emblazoned on Touch Too Much. Christopher Stead looked incredibly smart as he presented in a traditional Scottish kilt.

Day one of dressage for the One and  Two Star classes commences at 9.30 tomorrow morning in the main arena. The CCI*** proceedings will start later in the day at 15.00.

The ‘Guinea Pig’ tests (where a non-competing rider performs the dressage to ‘get the Judges eyes in’) for the One Star and Two Star will be ridden by Rose Macpherson & Nana Dalton, with the Three Star Guinea Pig Louisa Milne Home.