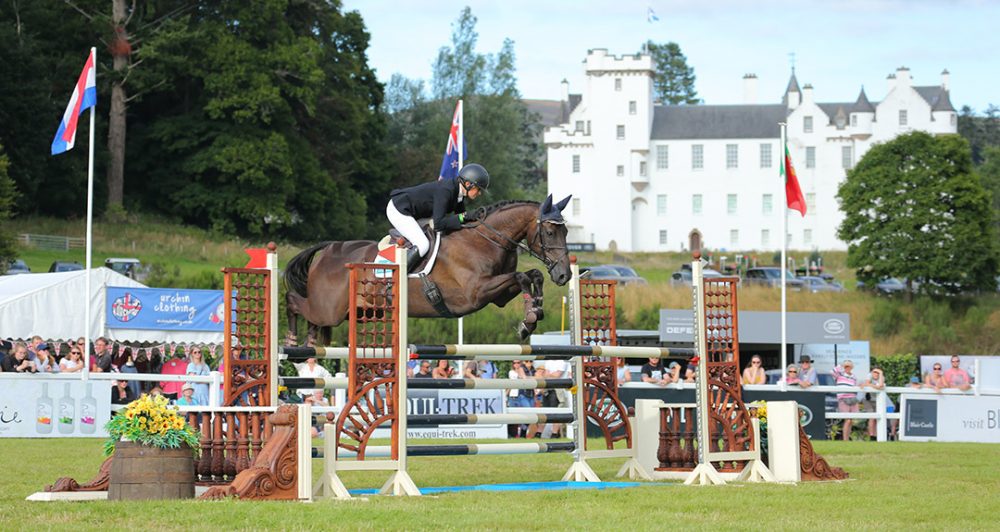 Dorset-based Rosie Fry finally put her Blair demons to bed and retained her overnight lead in the CCI4*-L with her Aunt Di White-Hamilton’s home-bred 10-year-old True Blue Too II. The pair show jumped clear to complete on their two-phase score of 36.0.

Nine years ago Rosie had gone into the show jumping phase at Blair in the lead with another horse but four fences down saw their chance of victory disappear. “I’m a bit speechless,” said a visibly emotional Rosie immediately after her win, “particularly after what happened last time I was in this position.”

Rosie admitted that show jumping is True Blue Too’s weakest phase and that the pair have worked hard with Emma Fisher to make improvements. “He tried so hard for me,” she added, “and we’ve now got our Badminton qualification which is amazing.”

Tom McEwen and Dream Big had held second place overnight but three fences down dropped them to eventual sixth.

This elevated 19-year-old Alice Casburn and her mother Caroline’s homebred Topspin II into second place after they jumped clear. Alice was in the enviable position of knowing she was sat on a proven show jumper having previously competed Topspin in pure show jumping classes, including Puissance: “The bigger the jump, the better he gets and that’s a lovely feeling going into the final phase,” she admitted. “I’m a very lucky girl to be sat on such a lovely horse – he’s amazing in both jumping phases.”

Topspin II’s grand-dam is Caroline’s former Advanced mare Spangle and is responsible for Alice “not quite going to University following a gap year. Horses are my passion and when I realised how good he was I knew I had to give it a go and university just never happened,” she laughed. Like Rosie and True Blue Too, the pair will hopefully contest Badminton in 2022.

Third place went to Accountant Lauren Innes and her own Dutch-bred Global Fision M: “This is my first time here, despite my Mother being Scottish, and I’ve absolutely loved it,” she said. “I’m over the moon with the horse as he really let me ride him today – he can sometimes get quite excitable but he jumped amazingly today.”

Clear rounds from both Izzy Taylor on Ringwood Madras and Nicola Wilson with Erano M saw them retain the fourth and fifth places they held after cross-country.

It was all change at the top of the CCI3*-L leaderboard after today’s final show jumping phase, which proved to be very influential.

Ros Canter took the win with her own and Alex Moody’s Izilot DHI after withdrawing her overnight leader, Shannondale Nadia. The mare incurred a minor knock on yesterday’s cross-country course and Ros felt she wasn’t 100% this morning.

Ros and Izilot DHI show jumped clear to complete on their dressage score of 27.1. Hayden Hankey and his own and Phillipa Heler’s Fools In Love’s clear round moved them up from third after cross-country to the runners-up position on 28.2.

“I’m absolutely over the moon,” said Ros. “He’s a talent the likes of which I’ve never sat on before – he’s very double sharp but his movement and scope is unbelievable, he almost feels like he’s double jointed.”

Ros brought both Izilot DHI and Shannondale Nadia up to the Land Rover Blair Castle International Horse Trials specifically to test their stamina before moving them up a level next season: “They both ran well and I was particularly pleased with how Izilot kept his brain yesterday with so many spectators around.”

Hayden Hankey was equally complimentary about the eight-year-old son of Harlequin Du Carel, Fools In Love, whom he has produced from a five-year-old: “I came here to solidify the training I’ve been doing with him as things have been very hit and miss with Covid,” he said, “and he answered every question. Both he and Cartown Galaxy (7th) coped well with the hills and finished well on the bridle. Fools In Love is definitely a 5* horse in the making – he’s got all the scope, all the gallop and is as arrogant as hell, my job is just to channel his arrogance and enthusiasm.”

Poles down for Nicola Wilson (Caunton Well Done), Tom McEwen (Something Special) and 2*-L winner Sarah Bullimore (Irish Trump) dropped them out of the top six, whereas a clear round from model turned eventer Edie Campbell and Fireball F elevated them up the leaderboard to third place:

“It’s my first time here,” said Edie, “and the journey had been worth it before this result but now the 10-hour drive back to Northamptonshire will definitely be easier.

“I’d been warned about the hills before I came so did extra fitness work with the horses which definitely paid dividends. This result means Fireball F now has his 4*-L qualification which was our main goal so it’s been a great weekend all round.”

Rosie Fry with Arise Cavalier finished fourth and Douglas Crawford with Shadow Lad fifth after clear rounds elevated them up the standings.

Sarah Bullimore topped off a week in which her selection for the British team for the upcoming European Championships was announced with a win in the CCI2*-L at Land Rover Blair Castle.

Riding Evita AP, a seven-year-old mare owned by Sarah’s husband Brett and the Seahorse Syndicate, she led from pillar to post, finishing on her dressage score of 26.5.

“She’s been amazing,” said Sarah. “This was our last chance to qualify for Le Lion [the world young horse championships at Le Lion d’Angers, France, in October] so I did feel the pressure! It’s very special to have led all the way through the competition.

“She had a leg infection which means she missed a whole chunk of time in which to get that qualification – I only entered Blair on Monday,” Sarah explained. “I have upset entries secretaries everywhere, changing all my plans!”

Lucinda Atkinson was overcome with emotion at finishing second and fourth aboard KGB Sandro and Dancing Revolution, both owned by Jane Crossley. The two horses completed on their dressage scores of 27.1 and 30.1 respectively.

Lucinda found seven-year-old KGB Sandro at Goresbridge Sales in Ireland as a three-year-old.

“He’s been very quirky, and this is his first proper season of eventing – he started the year at BE100,” said the Northallerton-based rider. “His dressage and cross-country is phenomenal, but he has struggled with the showjumping – I think this is the first clear round he has jumped all season! His stable-name is ‘Profit’ – he was supposed to be produced and sold – but we are having a great time with him and I’m very excited about his future.”

Dancing Revolution is usually ridden by Martha Todd, but Martha was unable to compete at Blair Castle and Lucinda took over the ride temporarily just 10 days ago. “Martha’s done all the hard work – he’s been unbelievable all week,” said Lucinda, who admitted that these were the highest placings at international level of her career.

British team gold and individual silver Olympic medallist Tom McEwen slotted in between Lucinda’s rides in third with Fred and Penny Barker’s MHS Brown Jack. It was also this partnership’s last chance to qualify for the seven-year-old final at Le Lion d’Angers.

“He led the six-year-old championship there last year until the showjumping and then had two fences down,” said Tom. “He’s jumped really well here and coped with the hills brilliantly, and we’ve ticked the box that hopefully will allow us to go back to Le Lion and go five places better this year.”

There was yet another change at the top of the leaderboard in section E of the CCI1* when overnight leaders Sarah Clark and Secret Affaer VII retired on the cross country course. A clear round inside the time enabled Katie Magee and Fairfield Mollymac to leapfrog ahead of Kyla Grieve and HHS Fort Worth when the pair picked up 3.6 time penalties, and dropped to third place. Amy Wybergh’s clean sheet across country moved Ooda Loop up in to the runner up spot.

Katie, who is based in Barnard Castle, said: “It’s amazing to be here – it’s one of my favourite places. Winning is pretty magical.” Fairfield Mollymac has been with Katie for three years, and she describes her as having been very easy to produce, and a ‘sweet, cuddly mare’.”

In section F, Charlotte Cooke and Midnight Dancer II stayed where they have been throughout the competition, in first place. The top seven placed riders all completed on their dressage scores, Maisy Spratt riding Sycamore Lad taking second place and Lucy Bagueley with the Connemara Stallion Glencarrig Dolphin third.

Midnight Dancer is a past Team GB pony gold medallist, having been competed by siblings Finn and Ellie Healy. He was Charlotte’s christmas present last year, and her goal is to make it onto the pony team for the Europeans in Poland next year.

“It’s my first time at Blair,” said Essex based Charlotte. “It’s been absolutely brilliant, especially with all the sponsorship from Land Rover. ‘Casper’ was on fire cross country!”

Aberdeenshire based Amy Marshall made it three wins on the trot with Bogton Juniper when taking the closely contested Scottish BE100 Championship. Hard on Amy’s heels was Lara Bayley Kerr on Far N Away.

“I really just came here wanting to complete,” said Amy. “This is only my fifth BE100, but we won the previous two so decided to give it a go, rather than do the BE90. The mare can be pretty sassy but didn’t put a foot wrong here. I’m over the moon.”

A dressage score completion moved Gillian Edward and Benny Station up from third after dressage to Scottish BE90Open Champions. In 2019 the pair finished the event in third place. Meanwhile Persia Bhatia climbed three places to fill the runner up spot riding Aughnacliffe Gem – a good improvement on their 10th place finish in 2019.

“We’ve had Benny since he was a five-year-old and he’s now 14,” Gillian explained. “My daughter used to compete him but I took over about five years ago when she went to University. He loves his cross-country, it’s usually the showjumping that is my downfall but I’m thrilled I got it right this time.”

Gillian, who has five-and-a-half horses at home (the half being shetland Dougal) teaches riding so should have suitably impressed her students with this result.