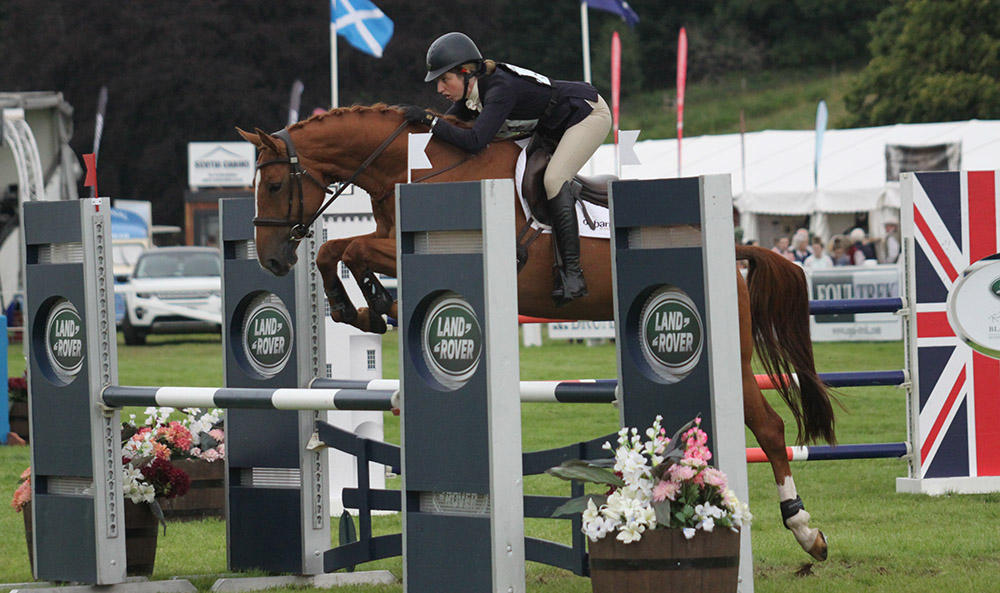 Rose Macpherson and HHS Canya retained their overnight lead in the BE100 Scottish Grassroots Championship after they posted one of only seven clear rounds in this morning’s show jumping phase, which again took  place in Land Rover Blair Castle International’s imposing main arena.

The seven-year-old has the pedigree for the job, being by Shane Breen’s Nations Cup ride Can Ya Makan. However, Rose admitted that the mare can be very sharp and, while genuine, likes to have a good look at anything that she doesn’t feel looks ‘quite right’.

“This was the biggest arena she’s been in and it was certainly a real eyeful for her,” Rose said.

The pair heads into tomorrow’s cross-country phase on a score of 25.3, a full five penalties ahead of closest rivals, Crieff-based Eilidh Macaulay with Rockcon. Reckcon is another mare with impressive show jumping lines – she is by William Funnell’s long time partner Billy Congo and out of Billy Rockaway, herself by Cevin Z.

A clear round from Emma Buchanan and Blaze ensured they retained the third place they had held after dressage on 30.5.

The rest of the leader board was shuffled quite considerably but the competition is far from over. There are just over 10 penalties between the top 15 going into the cross-country and the track will inevitably play a big part in the final standings.

“I think it’s a strong track,” said Rose Macpherson. “There are several technical questions and I think the water will be influential as a lot of the horses at this level just won’t have seen the number of spectators that those fences attract.”

Fourteen year old Cameron Swales from East Lothian and Machno Showtime rose from equal fourth after dressage to the top of the leader board in the BE90 Championship, taking full advantage of those who were above them rolling poles.

The pair goes into cross-country on a combined score of 29.8, the same as second placed Gillian Edward riding Benny Station. However, Cameron and Showtime have the advantage courtesy of a faster show jumping round.

“I’m really pleased with him,” said Gillian after her round. “he found the arena very atmospheric yesterday and backed off a bit today – show jumping isn’t our strongest phase so I couldn’t be happier.”

Dressage leaders Leona Blacklaws and Shannondale Enya dropped to third after they lowered the final fence and now sit just .5 of a penalty ahead of fourth placed Rachael Aiton and Splash Of Fun on 30.5.

Proving that event horses can come from all backgrounds, 5th placed Ruby Red II, ridden by Cumbrian-based Claire Light, is an ex-trekking pony who only began eventing when Claire offered to do some rehab work with her for owner Deborah Hogg after the mare broke a leg.

“I persuaded Deborah to let me do some BE80(T) classes with her,” said Claire, “and she’s amazed us ever since. She gets so excited but we’ll have to go flat out tomorrow to get the time – she’s 100% cob but doesn’t seem to know it!”

The final cross-country phase for the BE90 section starts tomorrow at approximately 12.30, followed by the BE100.