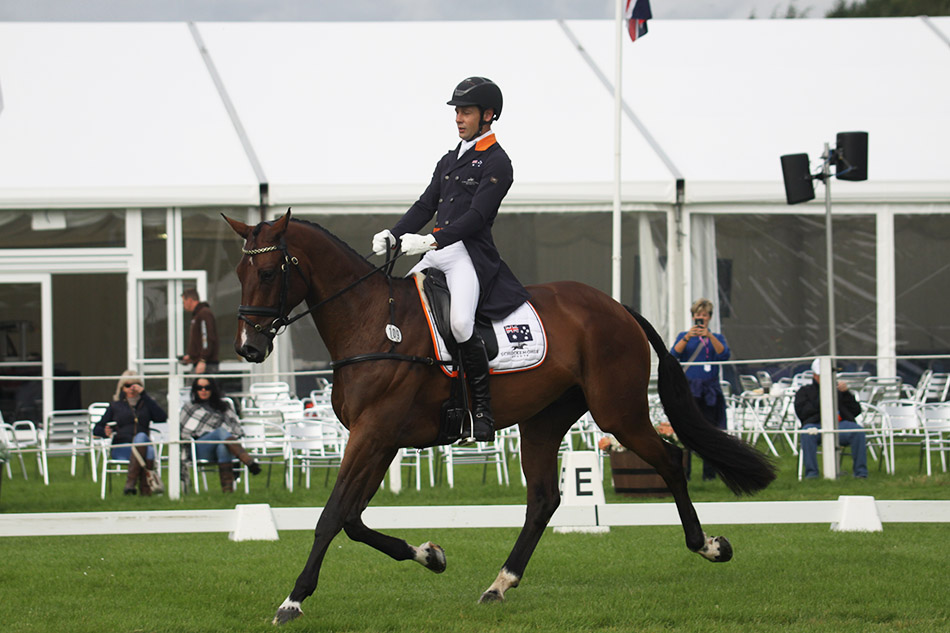 CCI***
At the close of the first day of dressage at Blair Castle International, Kirsty Johnston tops the CCI*** leaderboard on a score of 46.2, with all competitors having performed their tests. WTTL Opposition Sky Law performed a consistent test, scoring particularly well with the judge at C, Les Smith (GBR). Les’s fellow Ground Jury members are Sumiko Suzuki (JPN) and Peter Shaw (AUS).

“Opposition Sky Law has been very relaxed so far this week and she got her flying changes spot on, so I’m really pleased with her today,” said Kirsty, who travels from her home in Southampton up to Yorkshire to train with Chris Bartle.

“I love it at Blair and always try and come. One of Opposition Sky Law’s owners lives up the road so it’s good for her to see the mare compete locally, and we make a fun week of it.”

Alice Dunson and Sambo III are 2.2 penalties off the pace, with Emily Parker on Cooley Zest and Hazel Towers riding Simply Smart in second and third, making it a day for girl power. However, Mark Todd and Obos Colombus are breathing down Hazel’s neck so there is all to play for in Saturday’s cross country phase.

“I’ve only had the ride for a week,” said Sam. “Cooley Currency is a big, strong horse, and sadly for sale. He really doesn’t have a weak phase, and Emily has produced him beautifully on the flat – I pretty much just had to steer him in there, and not get anything wrong.

“He has a big gallop and high cruising speed so I’m hoping he makes light work of Blair’s hills on Saturday.”

Posting a score of 44.4, Sam has a narrow lead of 1.4 penalties over Germany’s Josephine Schnaufer riding Vivian 47 with Matthew Heath and Aloha completing the top 3. A further 22 combinations have yet to do their tests.

CCI*
Elisabeth Halliday-Sharp and Caroline Powell share the lead in the One Star, both Gorsehill Cooley and Stracathro Solitary Mistral being awarded a score of 40.3 by Ground Jury members Judy Hancock (GBR) and Sue Stewart (GBR).

Just half a penalty separates the next three riders, Carlos Parro, Victoria Loyer and Kirsty Johnston, with Chris Burton completing the top six. Fifty-two combinations are still to perform their tests, the action starting again at 9.30am tomorrow.

Full results can be found here.