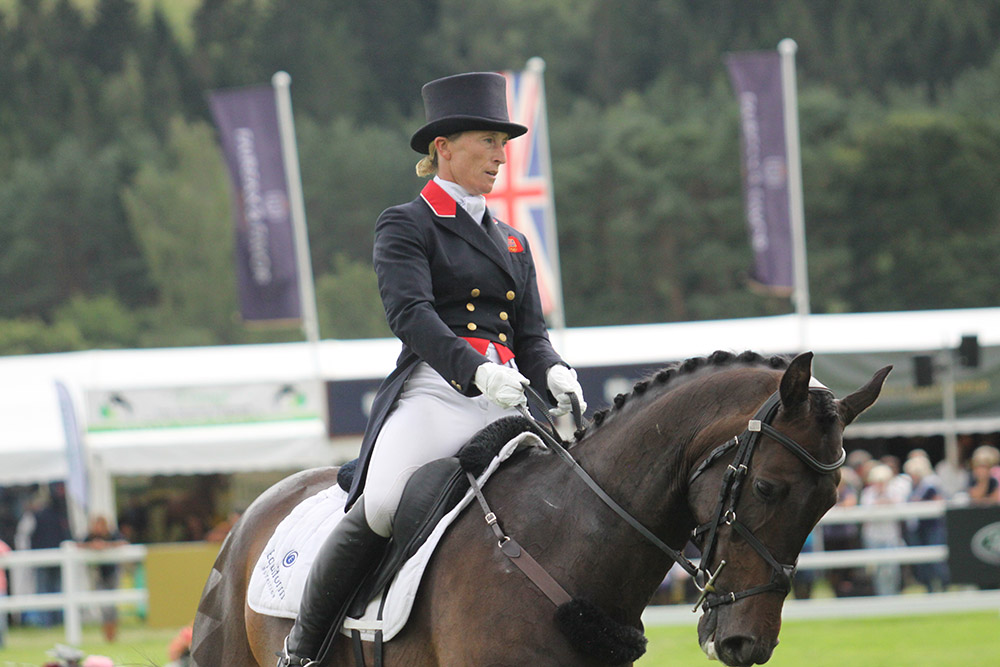 Daisy Berkeley slipped into the lead late in the afternoon in the CCI4*-S class at Land Rover Blair Castle International Horse Trials, and is in first place going into tomorrow’s showjumping phase.

Riding Ballinteskin Cooper S, a 10-year-old owned by Daisy and her mother Caroline Dick, Roxana White and Mary Scott-Gall, Daisy scored 30.4 – just a fraction of a penalty more than the two riders who share second place on 30.5, Astier Nicolas and Sam Ecroyd.

Daisy, who was part of Britain’s bronze medal-winning team at the 2008 Olympics, said: “The only mistake he made in his test was jogging a bit after I got a fly in my eye, and I prefer him a bit sharp because it meant he had a lot more presence.

“He’s an awesome jumper and a lovely mover. I thought coming to Blair would bring him on before he goes to Blenheim for the CCI4*-L, and I love it here. I’ve brought my eight-year-old daughter, Mary, with me, and she says it is the best holiday ever!”

Frenchman Astier Nicolas, a narrow second in this class on the grey eight-year-old Babylon De Gamma and also in the lead in the CCI3*-L aboard Lumberton, set the standard when first to go at 9am this morning.

“Our test wasn’t perfect – he’s a bit of a weak baby – but soon he’ll be very good,” said Astier, team gold and individual silver medallist at the 2016 Olympics. “He’s very talented, and one of the best horses I’ve ever sat. He’s my biggest hope for the future.”

Both Daisy and Astier complimented the ground conditions at Land Rover Blair Castle, saying that the going underfoot was “beautiful”.

Sam Ecroyd also scored 30.5 on Davinci III, while Polly Stockton and Mister Maccondy are very close behind in fourth on a mark of 30.8.

There are no changes to the leaders of the other three international classes at Land Rover Blair Castle after the second day of dressage. Emilie Chandler sits on top in the CCI4*-L with Gortfadda Diamond with a score of 31.8, ahead of Louisa Lockwood (Diamond Ructions, 33.3).

In the CCI3*-L, Greta Mason (Cooley For Sure) and Sarah Holmes (Lowhill Clover) hold joint-second place with 32.2 behind Astier Nicolas and Lumberton on 31.5.

And Aberdeenshire’s Emma Murray is still at the head of the CCI2*-L with 28.6 on Wainthropp. Again, two riders share second place in this section: Germany’s Josephine Schnaufer (Ronaldo IV) and Britain’s Polly Stockton (Sir Alfred II), both of whom scored 30.5.

Cross-country commences shortly after 10am on Saturday morning with the CCI2*-L, followed by the CCI4*-L and then the CCI3*-L. The showjumping phase of the CCI4*-S takes place tomorrow with cross-country on Sunday.