Caroline Clarke: Can she make it a Blair hat-trick across the levels? – Blair Castle International Horse Trials
Skip to content 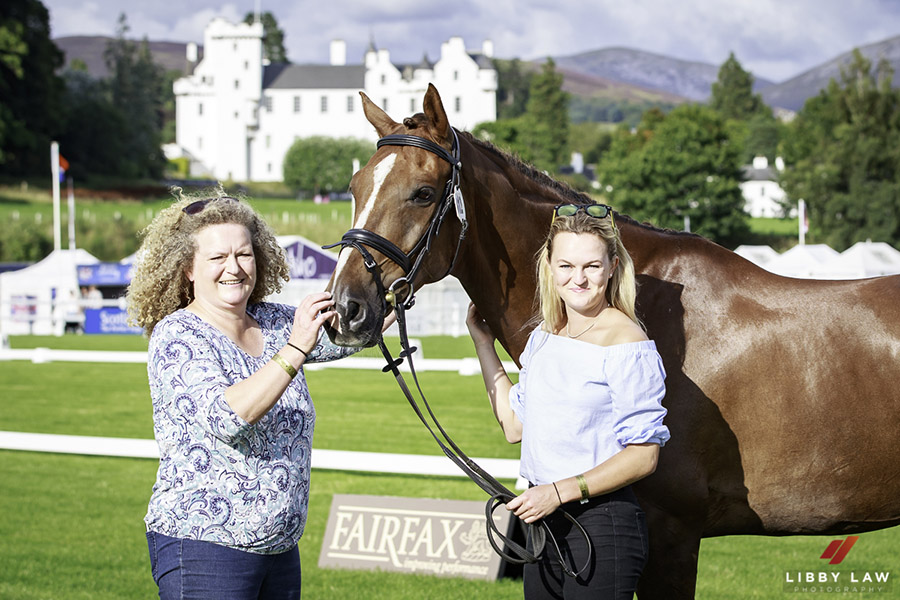 The winner of last year’s CCI**, Caroline Clarke has returned to the Blair Castle Equi-Trek Horse Trials this year to tackle only her second ever CCI*** with her seasoned campaigner, Touch Too Much.

The 10-year-old chestnut gelding, owned and ridden by Caroline, was brought over from Ireland by the Clarke family six years ago. The pair completed their first BE90 event (with jumps at just 90cm) at Burgham the following year, having what has become an uncharacteristic 20 penalties across the country.

Caroline said, “I always knew I wanted to compete at the pinnacle of the sport, but I don’t think we knew when we got him that Touch Too Much would be the horse to get me here.”

The duo are frequent competitors at Blair, having contested the One Star once, the Two Star twice and are this year, hoping to make it a hat-trick of completions across the levels on Scottish soil.

“Winning the Two Star last year gave me a lot of confidence, because it reassured me that we can be successful at International level. Coming here in 2016, I felt we were in a position to be competitive, whereas this year, we have stepped up to CCI*** level, so it would be good to just put in a great performance with less expectations.”

They completed their first ever CCI*** at Bramham this year in the Under-25 section, with a neat jumping double clear, adding just time faults to their dressage score.

“Being our first outing at that level, I didn’t want to put my foot to the floor, because I wasn’t sure how we would do. Now I know he can jump to that standard, I can try and shave a few time faults off, because I did get a bit of stick from my support team for how slowly I went,” laughs 22-year-old Caroline.

The achievements of Touch Too Much, aptly-known as “Possum” in the stable because of the unfortunate positioning of his eyes, are made all the more impressive given the fact that Caroline is an amateur rider, in her last year at the University of Bristol studying dentistry.

“Being in Bristol is hard when Possum lives in Yorkshire. I have to fly up and down the country to ride, so we try to compete on a Sunday. I finish University at 5pm on a Friday, fly home that evening, school him and pop him down a grid of jumps on Saturday, compete Sunday and then travel back to Bristol on the Sunday night.

“Sue Bagley schools him once a week to keep his sharpness and mum hacks him for fitness, but I only ride him in my holidays really or the weekend of a competition.”

Touch Too Much is the first horse to have taken Caroline past novice level, but he isn’t a natural event horse and doesn’t always find life easy.

“We struggle with our flying changes in the dressage and it seems that just when he is getting the hang of things, we either move up a level or I go away and then we’re back to square one. I know we could do a much more competitive test if we worked more on the flat, so I am looking forward to moving home next year – I’m hoping we could do a 4* if we sharpen up.

“He is also exceedingly lazy, so galloping doesn’t come naturally. You have to be super fit to get Possum around the cross country and because he is my only horse at this level, it’s hard to know what to expect as we step up.”

Caroline’s fitness levels should not be an issue, however, as she is currently in training to run the Bath half marathon to raise money for Hannah’s Wilberry Wonder Pony, though she did have to stop to catch her breath on the hilly Alec Lochore designed course.

“Initial impressions; it’s big, it’s scary and gosh, does your horse need to be fit. The terrain is going to make it tough. Just as you’re thinking that you can catch a breather, off it goes on an incline again. The second water is a significant rider frightener and I think there may be a few splashes there for the spectators.

“The double of arrowheads at 16 also looks tough. They’re on a downhill stretch, on a curving line and they are seriously skinny. It’s going to be a real question of accuracy and making sure the horse isn’t just rolling on into them.

“I’m looking forward to getting out there on Saturday.”