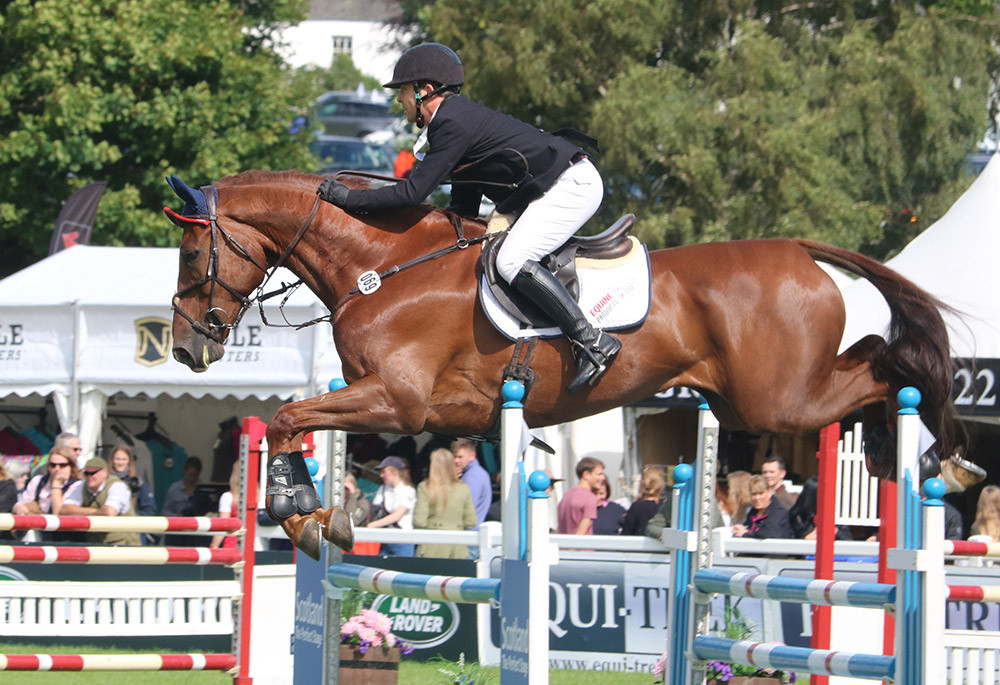 Ben Hobday and Shadow Man II head to Blair Castle next week to contest the top level class – the CCI4* three-day event, which takes place 22-25 August. Earlier this month the pair claimed the British Open Championship title, a well deserved accolade for the enormously popular rider who first proved his worth when awarded a place on the British Young Rider squad in 2007. The Young Rider European Championships that year took place at Blair Castle, with Ben placing sixth individually.

He won his first medals, team gold and individual bronze the following year. Since then he has established a talented string of horses, headed up by Shadow Man II, who not only claimed the recent British Open National Championship title but is a past winner of the British Novice Championship.

This season the pair was runner up in the Four-Star three-day event at Ballindenisk (Ireland) and led the British team to second place at the Strzegom leg of the FEI Nations Cup, whilst finishing runners up individually – an event where Ben’s wife Emma was also a British team member.

“I’ve had Shadow Man since he was two-years-old and he’s always stood out,” said Ben, who was long listed with Shadow Man II for this year’s Senior European Championships in Germany. “It was a real honour to be long listed and I hope that one day we make the cut.

“I’ve been careful not to over-run him, and I wanted to bring him to Blair – with its challenging terrain – to prove he has what it takes to be competitive when we step up to Five Star. I know that he can handle the hills because he finished third last year in the short format Four-Star.

“It’s time to test him, I want to win… Blair will always have a place in my heart because I did my first Europeans there. Also, the organising team are really helpful and the prize money is good, which is appreciated.

Ben and Emma have five horses between them, and are both well worth watching.

Who else you should be watching…

William Fox-Pitt should never be overlooked. He will be fresh back from contesting the Tokyo Olympics Test Event and brings Yes I Can and Atlantic Vital Spark for the short format Four-Star. Both horses have posted consistently strong results this season.

The ‘on fire’ Piggy French has both Carnival March and Highdown March running in the Three-Star – with her success rate to date, and a Blair winner last year, she would be hard to bet against for a top, possibly winning, result.

However, some of the biggest cheers may well be saved for local rider Wills Oakden. Perthshire based Wills has represented Great Britain on a number of occasions and his Blair Castle record is good. He won team gold at the Young Rider European Championships at Blair in 2011, and was runner up in the Scottish Open Championships in 2014. He was a member of the squad who contested the 2015 Senior European Championships at Blair, and has represented Great Britain in the FEI Nations Cup series.

With four horses to compete at Blair this year, Wills will have plenty of support from the team at Voltaire Design, sponsor both to Wills and to the Horse Trials.

Almost 100 BE90 and BE100 competitors (who jump fences of a maximum 90 and 100cm height) will be contesting the Scottish Grassroots Eventing Festival titles. This is the second year Blair has hosted these championships and, new for 2019, competitors will get to perform both dressage and showjumping tests in the main arena.

Of course, it’s not all about eventing. Showjumping and showing classes will feature in the programme – Blair Castle International is particularly famous for its Highland Pony Show. Pony Club mounted games, and Country Fair demonstrations add to the mix, providing a raft of entertainment for the whole family.

Blair is renowned for its shopping. Over 220 trade stands, including those in the large food hall, offer something for all tastes and budgets, from fine art to fudge, jewellery to gin. Persie Gin is our new drinks sponsor and its gins are well worth sampling. Tickets to the charity gin tasting evening on the Friday evening are available, the proceeds from which will go to our 2019 Charity, Riding for the Disabled Scotland.

Finally, look out for Henry the mechanical horse, who will be coming to Blair as part of the Trot To Tokyo campaign. His trip to Scotland is jointly funded by Blair, the BHS and BEF, and he can be found on the BHS trade stand during the event.

Mobility scooters are available but should be pre-booked through https://www.eventmobility.org.uk.