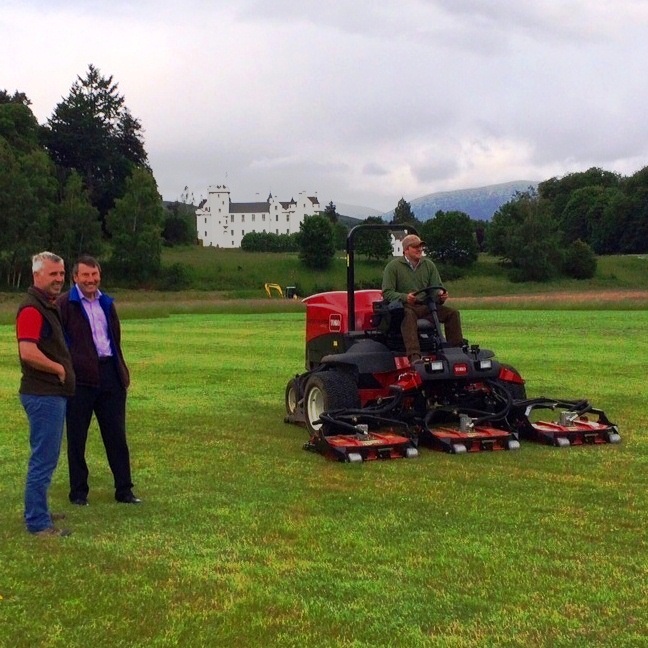 As we get ever closer to the Longines FEI European Eventing Championship 2015 to be held at Blair Castle 10 – 13 September Event Director, Alec Lochore steers the team in the last couple of months leading up to the iconic event.

We have had a recent visit from our Technical Delegate, Des Hughes who visited the course for the first time at Blair Castle, so he spent a day familiarising himself with the terrain. Course Designer Ian Stark, Course Builder Peter Wilson and I also joined him for constructive day finalising and discussing the course. There has been a mass team effort to get the ground ready for the event which takes months of preparation and it’s really paying off. It’s not just the cross country course that gets all the treatment, we have been irrigating and fertilising the dressage arenas to ensure that they are in their best condition for September. Now that the grass is really growing you can easily identify the shape of the course, for the first time the course will dip through the beautiful Blair Castle gardens which I am sure will be a special moment for the riders on the course.

On the sponsorship note, we are pleased to welcome a family-owned Scottish distillery, Kilchoman Distillery. It is great to have on board a sponsor who really encompasses the spirit of Scotland, for every day of the Longines FEI European Eventing Championship they will be awarding a ‘Kilchoman Moment of the Day’. This fantastic prize will be awarded for anything from an exceptional moment on the field of play, through to an outstanding contribution by a spectator at the event. The winner will be presented with a bottle of Kilchoman’s iconic 100% Islay whisky in the main arena.

The team have been working with the local school last week who will be performing a programme of contemporary and traditional dance on the Wednesday evening in the FEI Opening Ceremony. This is sure to be something special and we look forward to having the school children involved with an event so close to home.

I have been spending much of my time finalising the FEI schedule and continuing our communications with title sponsor Longines. On the office side we have increased from 5 to 7 members of staff, we are pleased that Jenny Meiklejohn and Julia Fairbank can join the Blair 2015 team to bring another dimension into the mix.

Early in June I spent a couple of days at a 4* event, Luhmühlen in Germany. This was mainly to support my wife Emily who was competing but I also picked up some valuable points to consider for Blair 2015. Although there were a limited number of British riders competing there was an array of foreign riders trying to catch selector’s eyes with a good run in the hope to be selected for Blair 2015. Nations are beginning to release long lists, we have already seen lists from Germany and Spain and without doubt others will start to follow soon.

With nearly 50 days to go ticket sales and campsite bookings are soaring. There is still time to buy tickets so head over to the box office to purchase general admissions tickets, season tickets, camping and glamping packages.