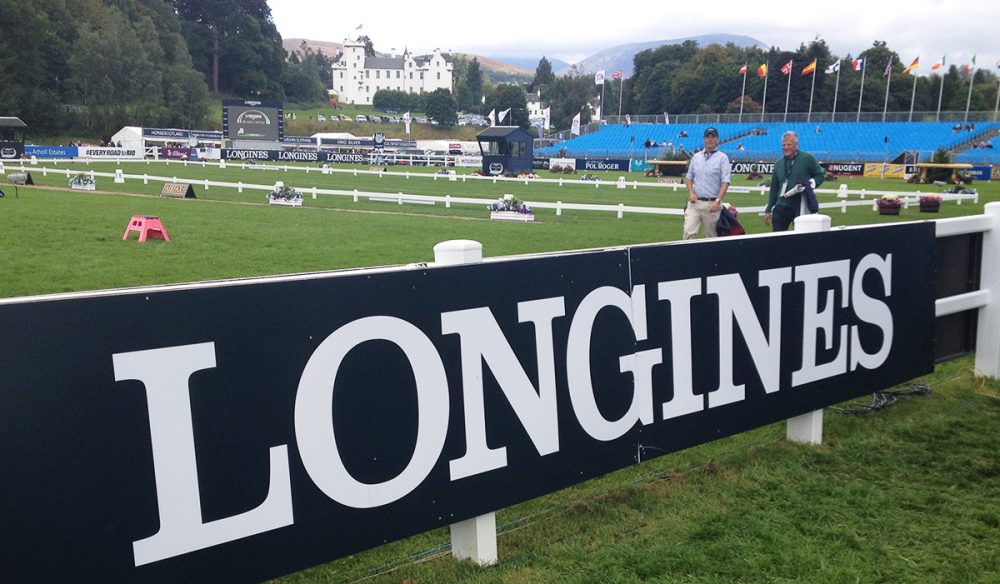 We are thrilled to announce our Title Sponsor!

My top news this month is that Longines has signed up as title sponsor for the European Championship at Blair, which is extremely rewarding. Longines already has close ties with equestrianism as a FEI Top Partner, and this relationship will be furthered by our association. I am very much looking forward to working with the company over the next few months and we are now officially the ‘Longines FEI European Eventing Championship 2015’ – so great news.

Also at Blair Castle, Mitsubishi Motors are confirmed as our official vehicle supplier. I know the team at Mitsubishi well and what an efficient and organised job they will do for us. They have huge experience in their task, having been title sponsor at Mitsubishi Motors Badminton since 1992, so we are in good hands.

Groundworks continue apace. The team really are leaving no stone unturned to ensure immaculate going when Europe’s best riders descend on Blair Atholl in September. Every time I make a site visit things just look better and better. Nicki, Lucie and Sophie have their work cut out in the office but are a great team and super organised, which takes a lot of pressure off my shoulders and, as you can imagine, the pressure is mounting as the months move forwards but with such an excellent team I know everything is in safe hands.

This is fortunate as I have a number of other events that need my attention. We have just about finished the final tidy up after a busy and successful Burnham Market International. Our new title sponsors, Bacon.co.uk, were great company and so enthusiastic, it really is a pleasure to have them onboard.

Gemma did her usual fantastically slick organisation for which I am eternally grateful, while Sam’s work with sponsors, developing ever stronger relationships, is paying dividends. The sponsors tent was a hive of activity and chat.

Also occupying my time recently was a talk I was invited to give by Nigel Wilde, owner of the Oasby Horse Trials site. Nigel has recently set up a charity, Foxdale Equine Assisted Learning (FEAL), and for their first major fundraising event I was asked to come along and talk about London 2012, as well as life as an organiser and technical advisor. It was a nerve wracking but ultimately enjoyable and successful evening, raising over £3,000 for this most worthy cause.

Now my thoughts have turned to Whitfield Horse Trials, which is fast approaching. At least with Gemma in charge I can focus on the new cross country courses rather than the logistics. I might also have to dedicate an evening to take Emily out for dinner; I was away for her birthday and had to rely on the girls in the office to intercept and wrap presents from the boys.

And, back to Blair, it is all systems go and we are moving offices and have a new site kitted out for the Longines FEI European Eventing Championship 2015 at Blair Castle.